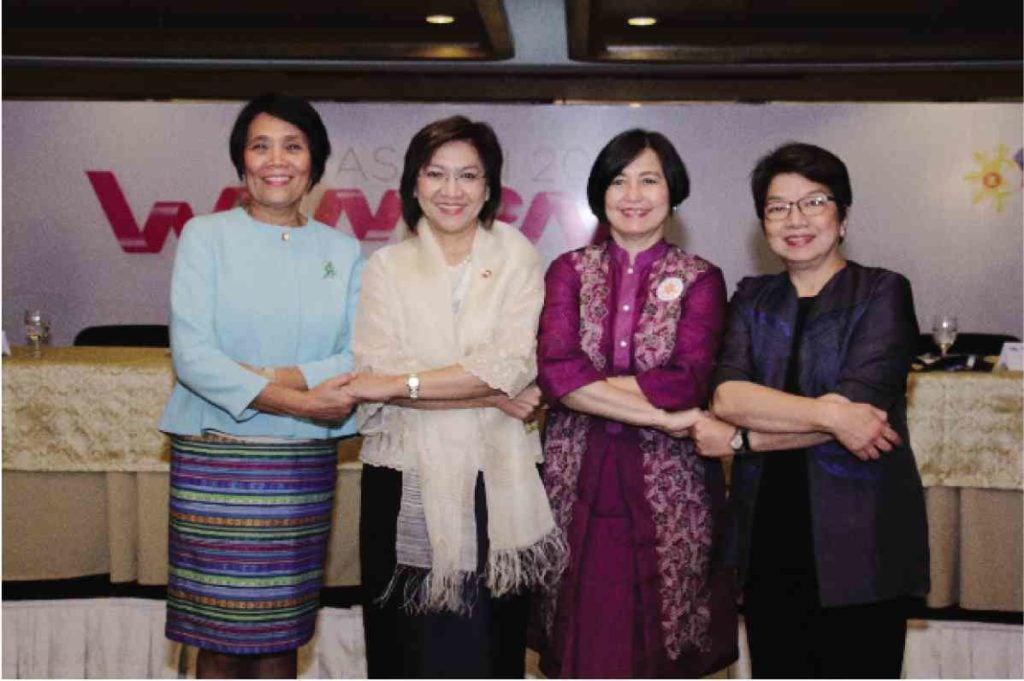 Last Aug. 31, Asean women had their “moment” during the weeklong Asean Business Conference in Manila, which was part of the yearlong, event-studded Asean chairmanship of the Philippines.

About 600 women delegates gathered at the Philippine International Convention Center (PICC) to send a powerful signal that this part of the 21st century will witness the emergence of women business leaders and entrepreneurs assuming leadership positions in the member-states of the Association of Southeast Asian Nations (Asean).

One highlight of the conference is the passing of a resolution that identified concrete steps to make women pre-eminent in the business world.

The resolution is set for presentation at the Asean Leaders meet in Manila set for November this year.

With the plenary conference over at the big reception hall, four Filipino women leaders called a media conference to highlight some points on the women’s quest for larger representation in business boards and for equitable treatment in choosing leaders among leading corporations in the Asean.

The growing observation was this: Though an increasing number of women entrepreneurs and business owners have been empowered in recent years, much still has to be done to enable a cross-section of women, particularly from the poorest segment of society, to become a productive and influential force in any Asean country’s economic growth and development.

According to Ma. Aurora Geotina-Garcia, co-chair of AWEN and chair of the Philippine Women’s Economic Network (PHILWEN), the Philippines’ gross domestic product will grow by 9 percent if empowered women actively participate and be part of the mainstream.

PCW Executive Director Emmeline Verzosa said women had risen to executive positions not just in private companies but in the government as well, where they now occupy 43 percent of top tier positions. This is in keeping with the Magna Carta for Women.

AWEN co-chair Pacita Juan revealed that in the recent gender gap survey, the Philippines ranked seventh out of over 100 economies polled.

This means that the country has advanced much in terms of furthering the importance of women in their economies.

But Juan said that for women’s actual contribution in the economy to be felt, “we must strengthen and energize our micro, small and medium enterprises and SMEs, which need a lot of financial and infrastructure support from both government and private institutions.”

Government has collaborated in setting up Negosyo centers.

The forum is a partnership of Asean Women Entrepreneurs’ Network (AWEN), the Philippine Commission on Women and the Department of Trade and Industry to put forward policies and initiatives to enhance women’s participation in business and innovation in the integrated Asean Economic Community, which became a reality in 2016.

Women have been making their presence increasingly stronger in the boards of existing companies, or have built their own enterprises that eventually became successful and created deep impact in their communities.

Our Filipino women entrepreneurs concede that “no liberation is needed in the Philippines.”

Our women are already a dominant force. But, for the rest of Asean, for reason of culture or religion, women empowerment in business remains a challenge.