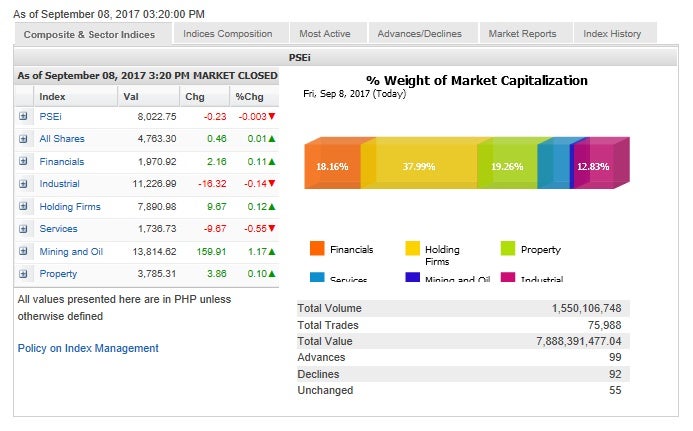 The local stock barometer ended the week on a flat note as concerns over Hurricane Irma and North Korea kept investors on the sidelines.

The main-share Philippine Stock Exchange index (PSEi) shed 0.23 points or 0.003 percent to close on Friday at 8,022.75 while regional markets traded with mixed sentiment.

Limlingan said the market was moving sideways due to lack of strong catalysts.

“Despite the market’s week-long strong performance, PSEi was still unable to establish a more bullish pattern, but only reinforced the 8,100 to 7,900 range for the market (for the) near-term,” he said.

The local market was weighed down by the industrial and services counters. On the other hand, the mining/oil counter rose by 1.17 percent while the financial, holding firm and property counters firmed up.

Total value turnover for the day amounted to P7.89 billion. Foreigners were net sellers amounting to P19.99 million for the day.

Despite the PSEi’s decline, there were 99 advancers that edged out 92 decliners while 55 stocks were unchanged.

The PSEi was weighed down most by PLDT and AEV, which both fell by over 1 percent, while BDO, SM Prime, Megaworld, Metrobank and Jollibee also lost ground.

On the other hand, AGI gained by 3.38 percent, while Metro Pacific and DMCI added over 1 percent.