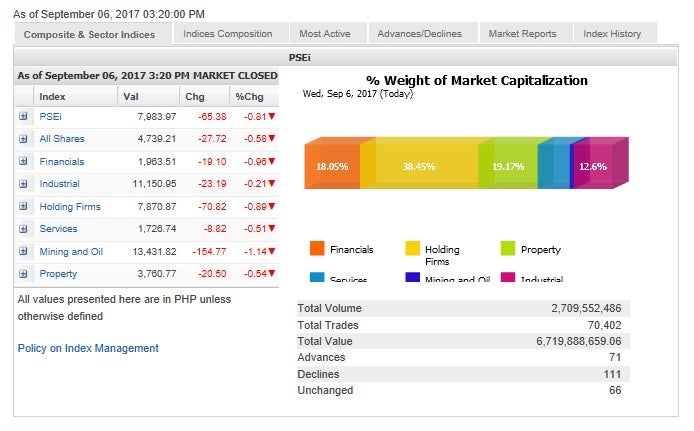 “Philippine and US stocks sank coming back from a holiday break, [and as] investors sold stocks due to tension in the two divided Korean [states],” said Luis Gerardo Limlingan, managing director at Regina Capital Development.

A top North Korean diplomat, Han Tae Song, ambassador to the United Nations in Geneva, confirmed that the hermit kingdom had successfully conducted its sixth and largest nuclear bomb test on Sunday, adding that the US was bound to receive “more gift packages” for its supposedly reckless provocations and calls for new sanctions.

At the local market, all counters ended in the red. The mining/oil counter was the most battered, posting a 1.14-percent decline.

Value turnover for the day stood at P6.72 billion. There were 111 decliners that outnumbered 71 advancers; while 66 stocks were unchanged.

Reflecting risk aversion, foreign investors were net sellers for the day to the tune of P315.63 million.

The market was weighed down most by GT Capital Holdings Inc., which fell by 2.21 percent. SM Prime, Metrobank, PLDT, SM Investments, BPI, AGI, Jollibee and Security Bank all slipped by over 1 percent.

On the other hand, Megaworld bucked the day’s downturn, gaining 2.37 percent. MPIC, URC and DMCI all added over 1 percent.