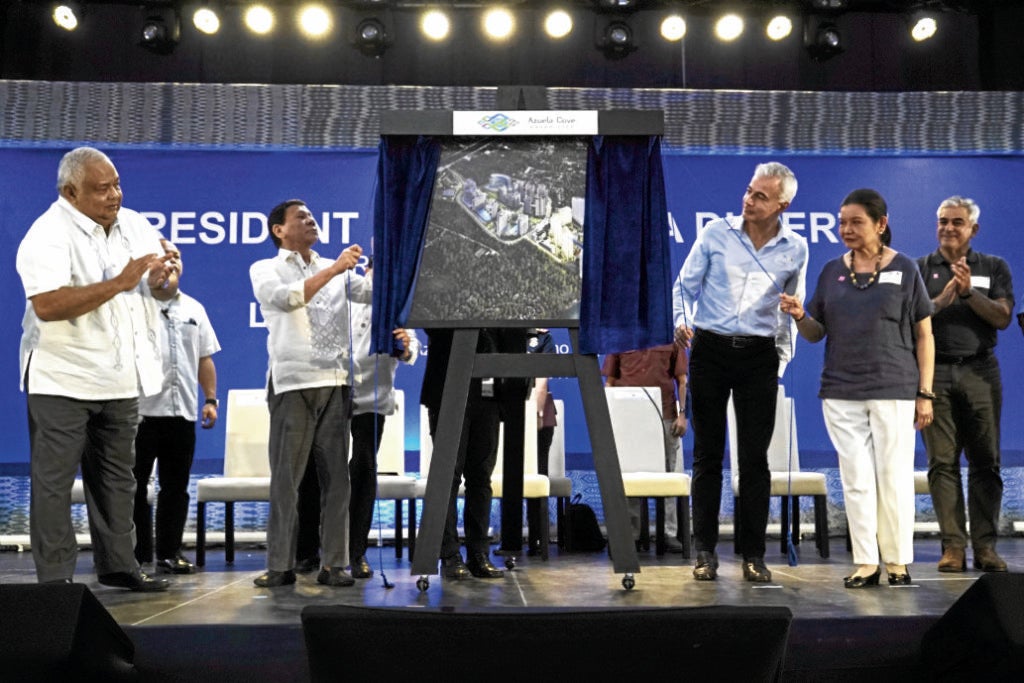 DAVAO CITY — President Rodrigo Duterte has reassured the business community that his administration was doing everything to create a conducive environment for investments.

Speaking on Friday at the launch of a P20-billion joint venture project between Ayala Land Inc. (ALI) and local property developer Alcantara Group of Companies in Davao City, Mr. Duterte said the government had taken steps that would make investors “do business with ease.”

He commended ALI and the Alcantara group — owned by the family of Finance Secretary Sonny Dominguez — for undertaking the 25-hectare Azuela Cove residential and commercial project, which showed that the government and the private sector “can achieve stronger ties” to create more jobs.

The President said the joint venture was also expected to increase land valuation and open opportunities to make the economy more vibrant and sustainable.

Around 6,500 workers would be hired in the construction phase alone, he said.

According to ALI, about 7,120 jobs will be generated when the project starts to operate. The project was expected to employ 13,000 people from construction to full operation.

In a statement, Jun Bisnar, vice president and chief operations officer of ALI Vismin Group, said the company had been “committed to enrich the way we live and enhancing land nationwide.”

“We focus on inclusive growth, sharing our expertise as a full line property developer to communities around the country as we remain a reliable partner in nation building,” he added.

According to its project briefer, ALI will initially shell out about P8 billion for the project’s first phase between 2017 and 2021. This will cover land development and retail construction, development of Ayala Land high rise condominium Phase 1 and St. Luke’s Medical Center.

The company will spend another P12 billion starting in 2021 for the development of the Cove, additional towers and retail construction. —Frinston Lim and Judy Quiros