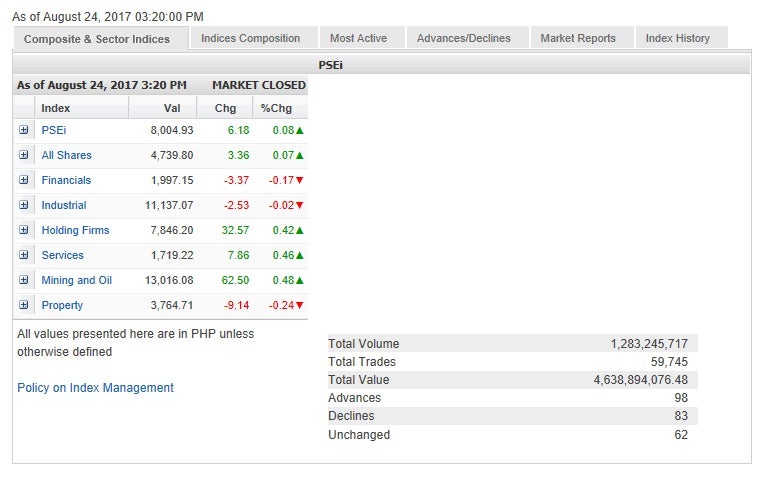 The local stock barometer yesterday crept back to the 8,000 level in thin trade ahead of a closely watched central bank symposium in Jackson Hole.

Across the region, stock markets were mostly firmer even as US stocks faltered overnight following US president Donald Trump’s threat to shut down the US government and end the North American Free Trade Agreement.

All eyes, however, are on the upcoming central bank symposium in Jackson Hole, Wyoming, where US Federal Reserve chair Yellen and European Central Bank president Mario Draghi are set to speak (Friday night Asia time).

On the upcoming Jackson Hole symposium, Citi said in a research note: “We continue to judge that the balance of risks from the event is tilted in favor of slightly hawkish indications.”

Meanwhile, Citi said comments by Trump had brought the debt ceiling issue to the forefront. “His comments suggest another round of brinksmanship around a government shutdown is likely; any hope of an early resolution of the issue now appear too optimistic.”

At the local market, the day’s gains were led by the holding firm, services and mining/oil counters while the financial, industrial and property sub-indices slipped.

Value turnover was thin at P4.64 billion as investors opted for caution as the “ghost month,” the seventh Lunar month began last Tuesday. This is the period when Chinese investors deem it unlucky to take aggressive investment positions.

There was modest net foreign buying amounting to P49.97 million for the day.

There were 98 advancers that edged out 83 decliners while 62 stocks were unchanged.

Investors mostly traded stocks outside the PSEi basket. Notable gainers included IMI, which rose by 8.74 percent, while Nickel Asia, Bloomberry and Cemex all gained over 2 percent.

Cebu Air and D&L Industries also rose by over 1 percent.