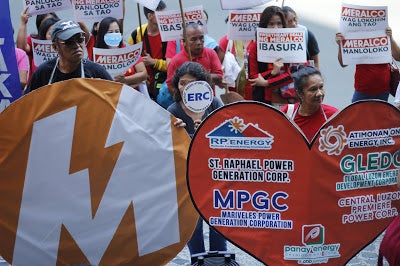 The rallyists, led by members of the Power for People Coalition (P4P), Sanlakas, the Freedom from Debt Coalition (FDC), the Philippine Movement for Climate Justice (PMCJ), and the Center for Energy, Ecology, and Development blasted Meralco for virtually “dealing with itself” by entering into PSAs with companies which it has large shares of.

“With a contribution this big, this company must have strengthened its commitment to be faithful to its consumers in solving our energy crisis. However, it seems that they have been fooling behind our backs together with their ‘sweethearts’,” said Butch Junia of the Power for People Coalition.

Meralco has denied allegations that it obtained favored deals from the ERC which was accused of granting “midnight deals” to the distribution utility.

The current Electric Power Industry Reform Act of 2001 (EPIRA) allows the distribution utility to contract with affiliated generation companies at 50 percent of its total demand. However, based on Meralco’s 2016 Annual Report, its PSA partners are actually their subsidiaries, associates and/or joint venture partners.

“This is nothing but a clear connivance between Meralco and the said generation companies—a deal made out of mutual benefits and equal exchange of favors, just like how ‘sweethearts’ do,” said Erwin Puhawan of FDC. “If the PSAs would push through, Meralco would have freedom to exercise influence over the cost of both the generation and the distribution of electricity.”

“What is clear is that consumers will end up carrying the cost of these incestuous deals, with Meralco profiting from both ends of the power sector,” said Gerry Arances of the Center for Energy, Ecology, and Development. “This undermines any semblance of commitment by the government to increase energy access in the Philippines, and will only reinforce the electricity oligarchy in place in the country’s energy sector.”

Meralco has earlier responded negatively to these accusations, saying they are being singled out from among the companies which submitted PSA applications. This prompted protesters to say that Meralco was just playing the victim’s card.

The protesters also added that it was very unusual and worrisome that this had gone unnoticed with ERC seemingly unconcerned. “We urge the ERC to slam the PSAs and break up this abusive relationship between Meralco and consumers,” Pedrosa said. “We cannot have a relationship based on lies,” he added.