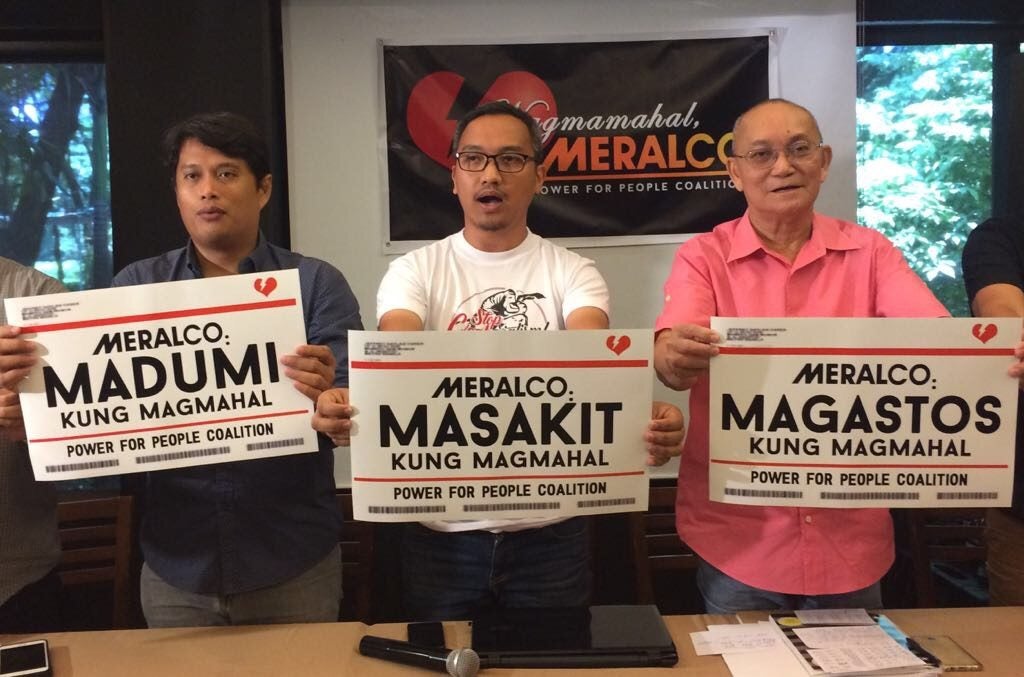 With the electricity rate increase this July and the Court-mandated refunds to cease this August, consumers and civil society organizations anticipate higher electricity bills in the coming months. This is made even more troubling by Meralco’s pending power supply agreements with seven coal power generation companies, which the groups believe will lock the country in to more expensive electricity for the next 20 or more years.

Power analyst and consumer advocate Butch Junia of the Freedom from Debt Coalition slammed Meralco for successfully avoiding the competitive selection process (CSP) which would have subjected the deals to public bidding.

“The failure of Meralco to avoid a mandatory CSP already long-delayed and once-postponed is incomprehensible, and yet we applaud and celebrate that failure,” Junia said.

“The CSP could have served as a hook of hope for us to be bailed out of expensive power and shield us from harmful fossil fuels,” Junia added, urging the Energy Regulatory Commission to enforce its own rules and scrap the deals for consumers to “get the best price.”

Stopping Meralco’s Power Supply Agreements (PSAs) with seven generation companies relying on coal will create opportunities for cheaper options to fill the gaps, according to Gerry Arances of the Center for Energy, Ecology, and Development, Inc. (CEED).

“Meralco’s shady dealings stand in the way of not only cleaner energy, but cheaper energy,” Arances said. “In fact, a solar company has recently offered that it can set up 5 GW worth of energy for P3 per kwh for the Greater Manila area, far from the P3.5 to P3.85 per kwh from coal,” he continued.

Arances lamented the fact that renewable energy has not been given the opportunity to compete in terms of its capacity to provide for the power needs of the citizens. “Even with the price of renewable energy decreasing at an international level, and with laws such as the Renewable Energy Act in place, the share of Renewable Energy has drastically decreased since 2008 from 34 to 29 percent in 2016,” Arances pointed out. “This points to a lack of commitment from the part of the government to reflect its national policy of promoting renewable energy in its development plan,” he added.

Consumers are set to carry the burden of paying for the power deals even before the plants start operating, according to Sanlakas Secreatary General Atty. Aaron Pedrosa. “Most of the PSAs involve coal plant projects that have yet to secure ECCs and are yet to be constructed, meaning that if approved, consumers would already pay for electricity yet to be generated,” he said.

“While Meralco and its generation companies will be assured of profits, consumers bear not only the economic cost of these projects, but also their environmental, health, and climate impacts,” Pedrosa added.

Philippine Movement for Climate Justice (PMCJ) National Coordinator Ian Rivera noted that aside from the environmental and economic cost of the coal PSAs, they would also keep the country from reaching its targeted Nationally Determined Contributions (NDCs) as part of the Paris Agreement.

“If corporations like MERALCO continue to operate ‘business-as-usual’, our people will remain impoverished, electricity will remain inaccessible, and the exacerbating impacts of climate change will continue to destroy our environment,” Rivera added. “This cost will not only be carried by us, but by generations of the future,” he concluded.