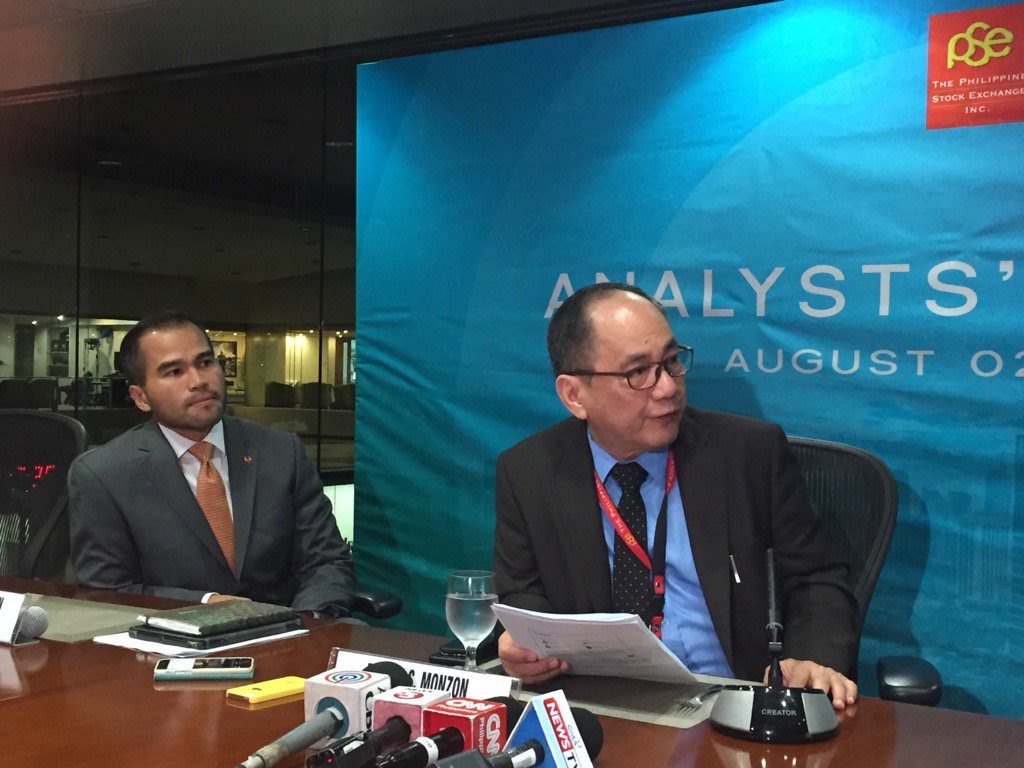 The Philippine Stock Exchange aims to chalk up P800 million in net profit this year, about 14 percent higher than last year’s level, on the back of robust listing and trading-related income.

The PSE saw a 7.4-percent year-on-year drop in first semester net profit to P345.15 million in the absence of one-time gains that lifted last year’s earnings. For the second quarter alone, PSE’s net profit amounted to P189.6 million, down by 8.8 percent from the same period last year, the bourse said in a regulatory filing.

Six-month operating revenues rose by 18.1 percent year-on-year to P662.53 million due to double- digit gains in listing- and trading-related fees.

Monzon told a press briefing late Wednesday that the expectation for the rest of the year would be to hit the full-year net profit target of P800 million.

In the first semester, listing-related income went up by 37.2 percent with the string of initial public offerings and stock rights offerings conducted during the period. Trading-related income, on the other hand, increased by 12.2-percent due to higher trading volume.

Average daily value turnover at the end of the semester amounted to P8.08 billion compared to P7.51 billion in the same period last year. Service fees from its subsidiary Securities Clearing Corporation of the Philippines (SCCP) also rose by 6.7 percent.

Meantime, other income declined to P77.54 million from last year’s P156.41 million due to non-recurring income booked in the comparative year arising from the property donation received by the PSE to build on its future headquarters in BGC. The PSE expects to move to this new office- which will unify the two trading floors now operating in Ayala and Ortigas – by the first quarter of 2018.

Capital raised in the first six months of 2017 amounted to P106.74 billion, which is 92.0 percent higher than the Php55.59 billion raised in the same period last year.

“The PSE remains committed to completing its major projects this year which includes the integration of the equities and fixed income exchanges as well as the introduction of new technology systems and new products for the market,” Monzon added.

The PSE also plans to woo more small and medium enterprises (SMEs) to list on its bourse. Monzon said the PSE was creating a “hand-holding” program for these SMEs.