Paris never gets old for proposing 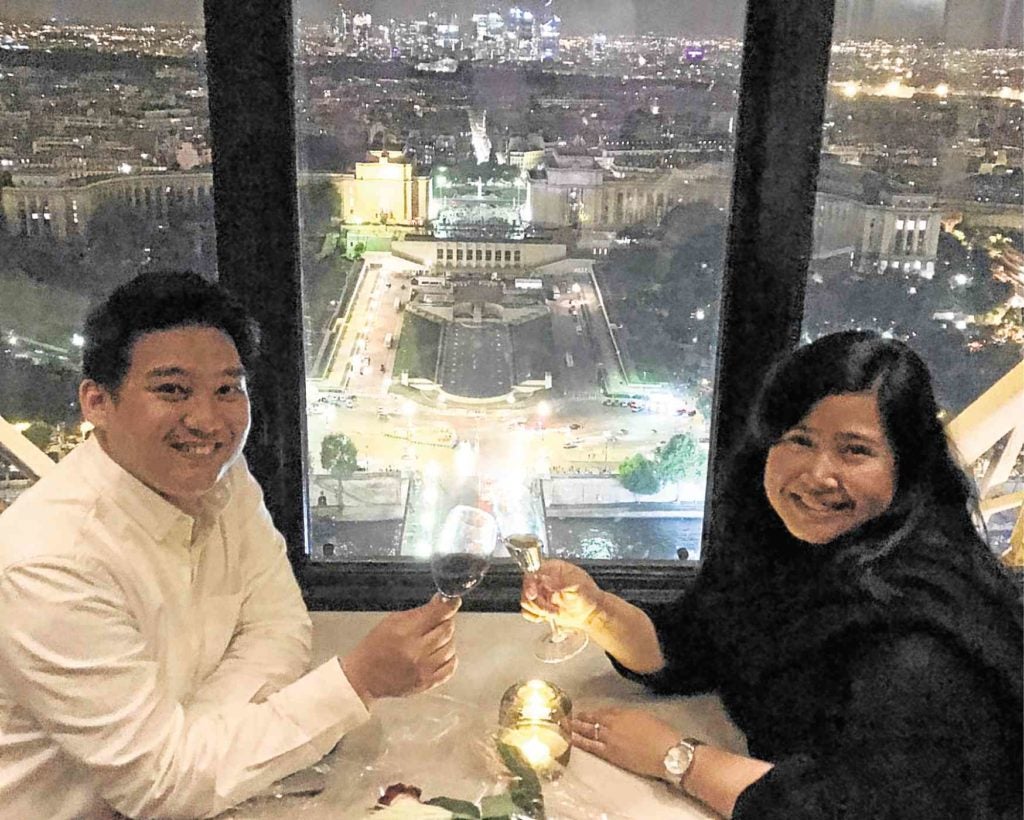 They don’t call it the City of Love for nothing.

At least every two blocks in Paris, there is a couple cuddling or kissing. I am certain because I counted as we waded through Paris traffic—which was shockingly as bad as Manila’s—from Gare du Nord to our home for the weekend, a flat rental via AirBnb. (Speaking of sharing economy apps such as Airbnb, Uber and Grab really help in the convenience and security of travelers that the government, while finding ways to regulate them, should not discourage. Perhaps the government can create its own app as an alternative, but don’t rain on the app parade that is sometimes the only semblance of hope in these trying transportation times.)

City of Love, City of Lights

I have been traveling with my sister, the gorgeous and gregarious entrepreneur Goldee Salcedo (check out Sweet Sally Desserts on Facebook and try her Triple Chocolate Cheesecake), who was patiently behind the wheel, driving from Bordeaux to Lourdes (2.5 hours), Lourdes back to Bordeaux (another 2.5 hours), Bordeaux to Epernay in the Champagne region (7 hours), and finally Epernay to Paris (2 hours) for two straight days!

Unbeknownst to her, she was in for a wonderful surprise in Paris …

The love of Goldee’s life, Makati congressional bet and three-term Magallanes councilor Nico Garcia, connived with yours truly to surprise her and propose to her in the Eiffel Tower.

On our first evening in Paris, Goldee and I, joined by The Duchess, dined at Le Jules Verne, a Michelin-starred restaurant on the second stage of the Eiffel Tower, 123 meters or the equivalent of approximately 50 floors from the Eiffel Tower’s ground floor. After we were seated behind the glass walls of the restaurant, Nico walked in and surprised Goldee with flowers.

“You’re here!” she cheered in disbelief. “How?”

“I’ll tell you all about it later? Wait, I have something to say … ”

With the magnificent view of the Trocadero and the rest of Paris at sunset in the City of Lights, Nico got down on one knee and offered Goldee an engagement ring, asking her, “Would you do me the honor of being my wife?”

And I have the honor of sharing with the world the news that she said yes!

The Duchess to my right could not contain her tears of joy. Neither could the couple seated to my left—they were there for their wedding anniversary and said they were reminded of their own engagement many years ago. Other dinner guests joined in the moment and gave the couple a hearty applause. An adorable Asian girl, probably around 6 years old, ran to our table, jumping and clapping her hands while smiling from ear to ear.

A minute later, the restaurant went back to business, with the alert and efficient yet charming servers of Le Jules Verne working the tables with the precision of military men. (Many thanks to Monsieurs Didi and Jean Jacques for helping orchestrate the surprise!)

Dinner began with a glass of the restaurant’s signature champagne—a beautiful champagne with great minerality and a hint of sweetness— appreciated with the amuse bouche and an appetizer of deep fried artichoke. Apparently, the menu changes frequently because freshness of produce and a commitment to seeking out and highlighting local flavors are philosophies of Alain Ducasse, founder of the restaurant.

The couple had a “delicate” lobster for the mains while I had a very memorable and oh-so-scrumptious pigeon that was honestly just perfectly cooked.

Dinner ended with a chocolate dessert, a version of Ducasse’s famous Louis XV chocolate cake, but in the shape of a hex-head bolt as an ode to the Eiffel Tower. (Try the Louis XV at Restaurant 101 in Enderun for a similar cake.)

Le Jules Verne is one of the many, many Michelin-starred restaurants of Alain Ducasse. In France alone, Ducasse has 15 restaurants to his name, including his 3 Michelin-starred eponymous restaurant at the lovely Plaza Athénée, a hotel immortalized in pop culture for being the place where Sex and the City’s Carrie Bradshaw (Sarah Jessica Parker) stayed during her first visit to Paris. Ducasse also holds the record of being the first chef to be running three restaurants with three Michelin stars in three different countries.

The Philippines, though, has a special place in the culinary legend’s heart, with Enderun Colleges becoming the home of the first Ducasse Institute outside France. The tireless and always charming Tricia Tensuan, vice president of Enderun, shares that Ducasse has also personally supported the Tuloy Foundation, giving some lucky Pinoy street kids scholarships at the Ducasse Institute Philippines, with arranged apprenticeships that may lead to permanent employment in Enderun partner companies such as the Four Seasons Dubai at Jumeirah Beach.

A few of our own chefs have also staged at Le Jules Verne. I learned through his comment on my Instagram post (@margauxsalcedo) that chef Sau del Rosario staged here. Chef Justin Baradas, the first Filipino executive chef of Restaurant 101 of Enderun, also apprenticed here (see First Class, June 25, 2017). So if you want to have a taste of Le Jules Verne, just head over to Restaurant 101—kuhang-kuha ang lasa (it captures the taste) at a quarter of the Eiffel Tower price albeit with no Eiffel Tower view.

If you would also like to propose there—whether for love (like Nico Garcia as well as Tom Cruise and Rod Stewart) or for business (like Presidents Macron and Trump, who dined there just this July)—you have to reserve months ahead. Make sure to request for the Trocadero view, but the restaurant does have another section, also with a view of Paris.

If it’s not your style, Le Jules Verne may be too formal or too pricey. Another option is 58 Tour Eiffel on the first stage/level of the tower, with more affordable rates and guaranteed seating for the Trocadero view, although it is so in-demand that you will also have to reserve months in advance.

If you are visiting Paris for food and not necessarily for love (like me), here is my personal “musts” list:

Angelina on Rue de Rivoli for an indulgent, rich hot chocolate. Arguably the best hot chocolate in the world.

Lenótre on Rue Saint-Antoine for mille feuille and eclair. Skip the overly sweet and overly commercial Ladureé for this one. A bite will show you what pastries and desserts really mean for the French.

La Cour Jardin in Hotel Plaza Athénée for lunch. It is at the same hotel as the uber fine dining Alain Ducasse au Plaza Athénée. It gives you a taste of Ducasse cooking in a garden setting at more accessible rates than in his fine dining restaurants. Plus, for the shoppers or window shoppers, Chanel is walking distance from this resto.

Le Servan to support Tatiana and Katia Levha who are half-French, half-Filipino sisters. The two were guest speakers at Madrid Fusion Manila this year. Tatiana spent time at L’Arpège and L’Astrance. The dishes are big enough to share, and very hearty; the ambiance is chill but chic. The food makes you feel like you are eating at a French country home or in Lyon (they serve calf’s brain and sweetbreads) but the crowd’s fashion reminds you that you are undoubtedly in Paris.

L’Atelier de Joel Robuchon in Saint Germain. You may have already been to Robuchon’s ateliers in Hong Kong or Singapore but this one is special because this was the first of all the ateliers. In their own words: “After a ten-year absence, Joël Robuchon’s return in 2003 was marked by the opening of the first Atelier de Joël Robuchon in Saint-Germain-Des-Prés, Paris. This innovative comeback saw the world’s most starred chef enter a new realm of fine dining.”

Le Chateaubriand in the Republique area for an inventive bistro tasting menu for only 70 Euros. This restaurant has been on the list of the World’s 50 Best Restaurants.

When you want to spend just 2 euros for a meal, there’s the Carrefour grocery store. Get a packed salad and cheese and you’re good to go. Let’s get real here—Paris can be too expensive if you don’t watch your wallet.

Or head over to the Rue Cler neighborhood for a quick trip to the market or some specialty food stores, patisseries and butchers. Our last meal in Paris was adobo, requested by Goldee, because we missed Manila so much—cooked by Nico using ingredients just from the market at Rue Cler! Because while Paris is for lovers … there’s no place like a Filipino adobo- and kanin-filled home!