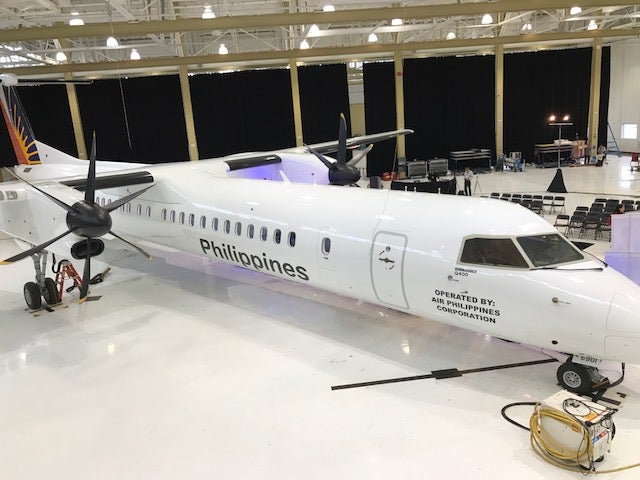 The new Q400 aircraft at the terminal before the turnover rites. All photos by Abel Ulanday

Toronto, Canada — Philippine Airlines has acquired a new generation turboprop aircraft that is expected to help boost its domestic operations and services.

The Bombardier Q400, a new generation “jet-like” turboprop, was turned over to PAL president Jaime Bautista by Bombardier officials in colorful Philippine-inspired ceremonies on Thursday at the Canadian company’s facility in Toronto where the aircraft is manufactured.

“With its superior performance capabilities, unmatched profitability advantages and exceptional passenger experience, the new Q400 aircraft will enable Philippine Airlines to increase its competitiveness and set a new standard for turboprops in the region,” said Jaime J. Bautista, President and Chief Operating Officer of PAL.

“We are excited to bring this new aircraft back to the Philippines, and are confident that the Q400 aircraft will continue to play a significant role in positioning Philippine Airlines as a five-star airline and in regaining its dominance in the domestic market.”

Philippine Airlines’ new Q400 aircraft is configured with 86 seats in economy and premium economy classes with a 29-inch and 33-inch seat pitch respectively. The aircraft delivered today is scheduled to enter into service in two weeks.

Bautista said the new Q400 is the first of 12 planes that they have ordered from Bombardier. Four other planes will be delivered within the next five months and will be based in key domestic airports of the country. 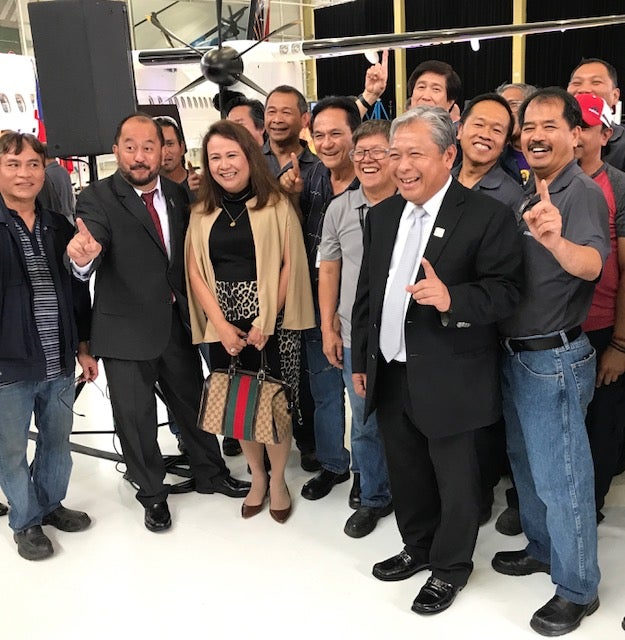 PAL President and COO Jaime Bautista (2nd from right), together with Sen. Tobias Enverga and wife, join Filipino workers in Bombardier in the celebration.

The aircraft delivered on Thursday will be flown to the Philippines on Friday (July 21) by a Filipino crew of three pilots and three technicians who have been trained on the new features of the aircraft. It is expected to arrive in the country in about a week’s time, depending on the weather conditions in at least seven countries where it has to refuel.

Bautista was joined by PAL Senior Vice President for Planning Lito Alvarez and other top officials for the turnover rites. The Canadian government was represented by Ontario Senator Tobias Enverga, a Fil-Canadian. Also present were Philippine Ambassador to Canada Petronila P. Garcia.

On hand to witness the turnover rites were some of the 200 Filipino engineers and technicians employed by Bombardier and who in many ways had helped build the new Q400 series.

During an interview with Philippine media after the turnover, Bautista said the acquisition of the new aircraft is part of PAL’s bid to be more efficient in its operations and services. It is also aimed at strengthening its market share in the domestic airline business.

He said he would want to see PAL reach a 5-star status as an airline company to be at par with noted Asian airlines such as Cathay Pacific, Singapore Airlines, Eva Air, Asiana, Garuda Indonesia, and Hainan Airways of China.