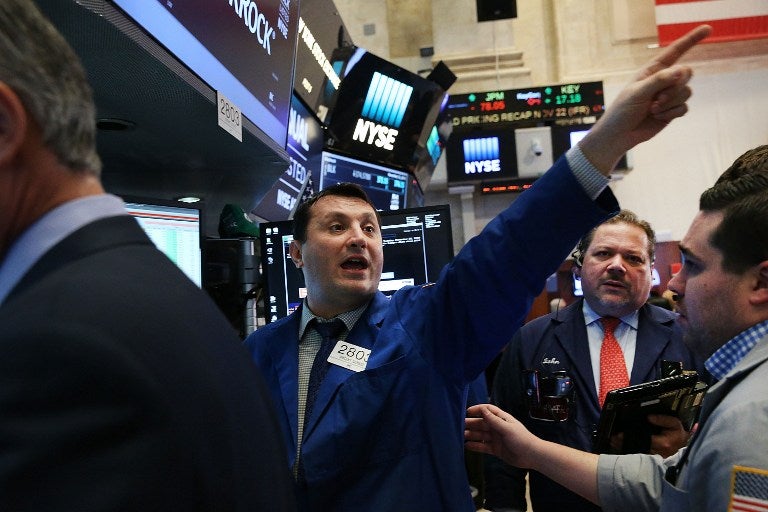 Traders work on the floor of the New York Stock Exchange (NYSE) on November 22, 2016, in New York City. AFP FILE

The Dow, S&P 500 and Nasdaq all ended at new peaks as investors shrugged off worries about Washington, where President Donald Trump’s agenda has languished amid opposition to his health care reform proposal.

Bourses in Europe were higher ahead of Thursday’s European Central Bank meeting. Tokyo, Hong Kong and Shanghai also all rose.

Earnings growth among companies in the S&P 500 has thus far been “much better” than expected, said Art Hogan, chief market strategist at Wunderlich Securities.

“That is helping the stock market and is the focus this week,” Hogan said.

Maris Ogg, president of Tower Bridge Advisors, said sentiment has also been boosted by the improved outlook in Europe following the election of French president Emmanuel Macron as well as the recognition that Trump is a business-friendly president, even if his agenda looks uncertain.

“The market is recognizing we are in a pretty good environment and we are at the beginning of a cycle that could on for quite a while,” Ogg said.

ECB chief Mario Draghi has expressed greater confidence in the economy in recent weeks and analysts are looking for him on Thursday to continue to prepare the ground for an eventual shift away from easy-money policy later this year through a tapering of the bond purchases.

Still, Kathy Lien, managing director of BK Asset Management, said ECB officials have been unnerved by the rise of the euro of late and warned the central bank will want to avoid giving the currency a further boost.

“It is in their best interest to halt the one-way move, ease the euro off its highs by repeating that inflation is not on a self-sustainable path, and then gradually set expectations for taper from a lower base,” she said.

“That way… they could take the steam out of the rally.” CBB