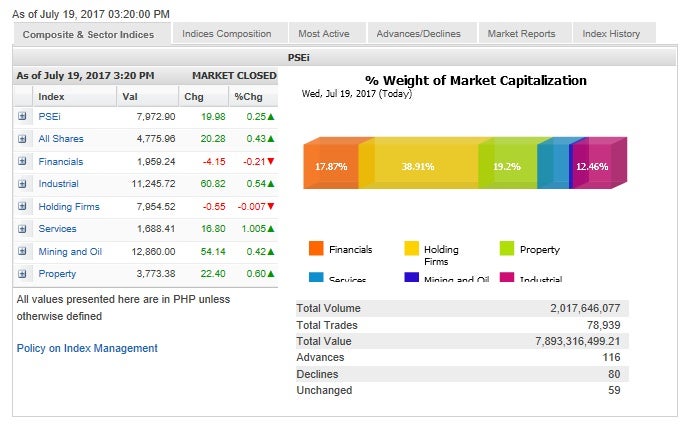 The benchmark Philippine Stock Exchange index (PSEi) advanced yesterday and even breached the key 8,000 level in intraday trading ahead of the second-quarter earnings-reporting season and in anticipation of the much-awaited tax reform program, BDO Unibank chief strategist Jonathan Ravelas said.

Ravales noted that investors were also looking ahead toward President Duterte’s second State-of-the-Nation address on Monday.

Investors were also positioning now as they await early clues on the direction of the economy.

Ravelas said that after consolidating between 7,700 and 8,000, it was possible for the PSEi to “break out” beyond the 8,000 should Congress follow through with tax reforms and if infrastructure projects under the “build, build, build” initiative move beyond the planning stage.

Data from the PSE showed that a total of two billion shares valued at P7.9 billion changed hands yesterday. A total of 116 companies gained while 80 declined and another 59 closed unchanged.