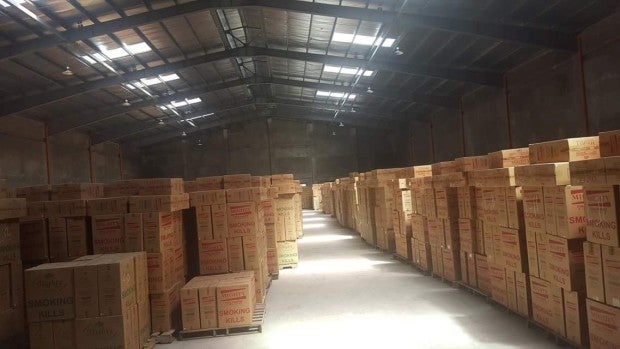 Might Corp. warehouse in Pampanga where fake cigarette tax stamps were found on the products. (CONTRIBUTED PHOTO)

Homegrown cigarette manufacturer Mighty Corp. will sell its assets to the local unit of Japan Tobacco International for P45 billion to settle its tax liabilities, an offer which the Department of Finance on Wednesday said it was “studying.”

In a statement, the DOF quoted Mighty president Oscar Barrientos as saying in a July 10 letter to Internal Revenue Commissioner Caesar R. Dulay that the company was willing to “settle all such excise and tax issues and respectfully offer as settlement of the company’s shareholders’ and its officers’ liability in this regard the total sum of P25 billion” for the P37.88 billion in allegedly unpaid excise taxes that the Bureau of Internal Revenue earlier uncovered.

The BIR had filed three tax-evasion cases against Mighty before the Department of Justice for alleged use of fake tax stamps in order to dodge payments of excise taxes.

The DOF further quoted Barrientos as saying that “the settlement sum would be funded by means of an interim loan from JTI Philippines and the sale by Mighty and its affiliates of its manufacturing and distribution business and assets, along with the intellectual property rights associated with these assets, including those owned by the company, Wong Chu King Holdings Inc., and other affiliates to JTI or any of its affiliates for a total purchase price of P45 billion, exclusive of VAT.”

For the part of Finance Secretary Carlos G. Dominguez III, he said “we are studying the offer.”

But Dominguez clarified that “the settlement offer of Mighty for its tax deficiencies is separate from the criminal charges that might be filed in court by the BIR against the company.”

The DOF said Barrientos indicated that Mighty will pay “P3.5 billion in deficiency excise taxes on its cigarette products that are now the subject of the three tax cases pending before the DOJ.”

Also, Mighty will remit “P21.5 billion representing the liabilities of the company and its shareholders, as well as the company officers for all internal revenue taxes, including income tax from 2010 to 2016 and the tax period up to the closing of the proposed transaction with JTI, and all transaction taxes related to the agreement with JTI,” the DOF quoted Barrientos as saying.

“The initial payment of P3.5 billion will be paid by the company on the company’s behalf on or before July 20, 2017. A binding memorandum of agreement in relation to the proposed transaction (with JTI) will be concluded shortly (and prior to July 20, 2017) subject to finalizing terms with JTI and JTI completing its due diligence,” Barrientos said, adding that the remaining bigger balance will be paid on or after Mighty is sold to JTI.

The DOF added that “Barrientos also requested the BIR in its letter for a reinvestigation of its pending criminal complaints before the DOJ following the initial payment of the P3.5 billion, along with a certificate of payment.”

“We also respectfully request the BIR to issue to the company and its shareholders and officers following closing of the proposed transaction (with JTI) and the payment of the P21.5 billion the relevant certificate of availment of compromise, a final tax assessment for all the company’s excise and other tax issues described above, and relevant tax clearances to the company, its shareholders and officers,” Barrientos’ letter read.

As such, “Barrientos committed to retire the operations of Mighty following the conclusion of its deal with JTI,” according to the DOF. JE