In SE Asia, Filipinos are the most active netizens 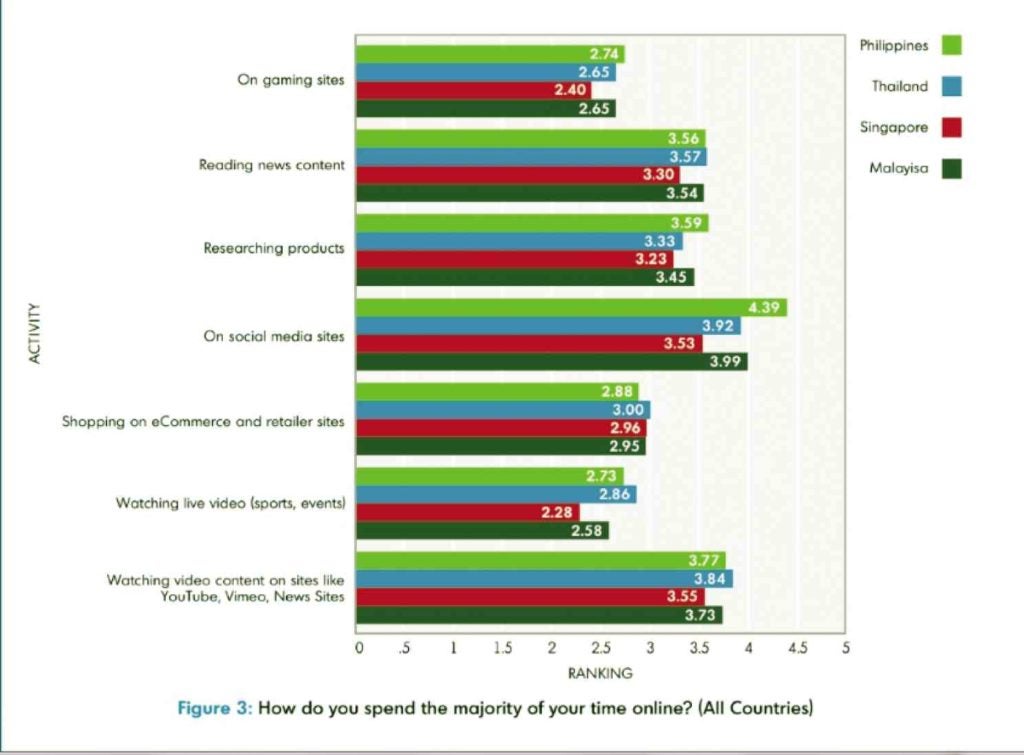 After being dubbed the “Facebook capital of the world,” the Philippines can claim another internet-related accolade as the most active nation online in Southeast Asia (SEA).

This is based on the key findings of global digital content delivery company Limelight Networks Inc.’s recent report, “The State of the User Experience—South East Asia.”

As part of the company’s series of annual surveys which delve into consumer perceptions and behaviors around online activities, the 2017 study conducted by a third-party company sampled 1,600 consumers chosen at random in four SEA nations: Malaysia, Thailand, Singapore and the Philippines.

The study found that Filipinos, apparently, take top spot when it comes to number of hours spent online outside of work: 47 percent of those surveyed in the Philippines said they spent at least 16 hours a week on the internet. Malaysia came in second at 42 percent.

This, despite the Philippines having one of the slowest internet connections in the world, which is caused by a number of factors, says Jaheer Abbas, Limelight Networks regional director for SEA and ANZ: “High levels of literacy among the population, and higher percentage of population who are technology-savvy compared to other regions, [which results in] good adoption of newer forms of content and platforms on the internet.”

Abbas adds: “With the globally dispersed nature of the Filipino population, there is probably a high need to be socially connected.”

Across the region, however, the gadget of choice is one and the same: the smartphone. It only means one thing for brands that want to reach out to more of their online consumers, says Abbas: “Businesses can plan their go-to marketing strategy by building their apps for mobile devices and providing excellent user experience on those devices.”

The study found that social media and shopping seem to go hand-in-hand across the majority in the region, with consumers researching, through family, friends, and other contacts, what they think of certain products. (Singapore is an exception, as the majority of the population use social media more to look for online coupons instead of shopping advice).

Given the strong connectivity among the majority in the region, SEA’s online consumers also expect nothing but the best from the sites they frequent. “Consumers in the region expect that website performance will be equal across all the devices they employ to access the internet,” the report reads. “However, more consumers expect access to be faster on a mobile device rather than a desktop or laptop computer. This parallels the dominance of the smartphone to access the internet in the region.”

In relation to this, the survey also found that the majority in the region will abandon a site if it takes too long to load. The Philippines, however, is an exception: “Filipinos are more tolerant and patient if the site loads a bit slower. Average users in Philippines are willing to wait four to five seconds longer than users in other SEA countries,” says Abbas.

However, the study also found that the region as a whole is a forgiving bunch, and will give a poor-performing website another shot.

A more personalized experience is another expectation of SEA’s online consumers of their favorite sites. “Together with a consumer predilection for ‘fresh and updated’ content… consumers want a personalized web experience,” reads the report, with 67 percent of the population saying that they want a website to remember that they’ve been there before, and therefore make recommendations based on their previous visits.

Ultimately, with the report’s findings on the dominance of social media platforms among SEA’s online consumers, “brands and business can use this information to appropriately spend their marketing budgets and improve their customer acquisition rates,” says Abbas.

“The study’s findings can also guide content owners to create services—videos, news, games—that can be accessed by online users while staying on the social media platforms they are so used to,” he adds.