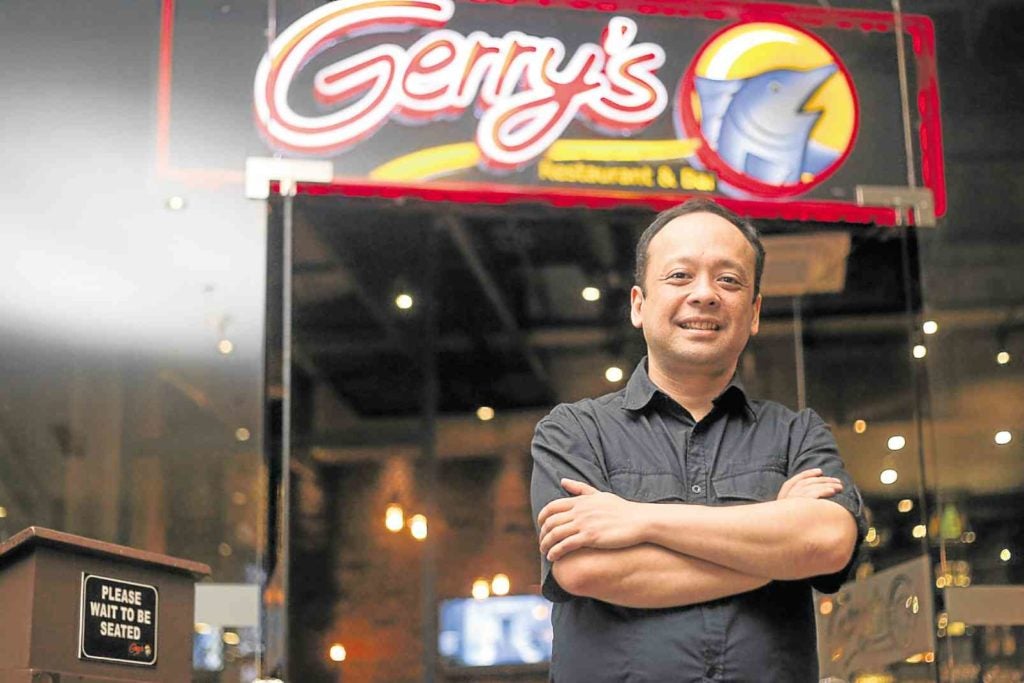 A dining concept executed well, backed by a virtually fail-proof menu of well-loved Filipino fare.
Such is the simple business formula that has kept Gerry’s Restaurant and Bar alive and kickin’ these past 20 years, despite being in an industry that is becoming increasingly competitive, both locally and abroad.

“It feels like such an accomplishment for us to still be here,” says Gerry’s senior marketing manager Francis Villaluz, who has been with the company since 2002.

Not that Gerry’s isn’t used to competition; in fact, when it was first opened as Gerry’s Grill by owners Gerry Apolinario and Jerome Ngo in 1997 on Tomas Morato in Quezon City, the restaurant already had to contend with similar diners in the area.

“Almost any concept back then had a grill. [Competition] was really cutthroat because they were opening left and right, and their menus were also pretty good. There was an identity struggle then because people would go [and ask]: What was the name of that grill again?” Villaluz recalls.

When the grill trend died, Gerry’s then had to contend with the next wave of restaurant concepts, which were mostly American-style casual diners.

Still, such situation didn’t hamper Gerry’s growth, because they stuck with their “game plan,” which was to consistently offer a wide variety of good Filipino food to their customers. Today, their branches are situated mostly in malls, since they found their strength in serving meals meant for sharing among big groups: families, friends, coworkers.

Villaluz admits, though, that “that wasn’t really the intention.”

“The owners were young back then. They were 29-year- olds who wanted a place to hang out on a Friday night,” he says. “That was the original concept, but they went with the flow, so to speak, and when people wanted food and variety, they [gave them] that.”

The restaurant now has 89 local branches and six abroad—three in the US, a couple in Singapore, and one in Qatar. Given Gerry’s fare, they usually open where there is a sizeable Filipino community, says Villaluz.

“But then [the Filipinos] also introduce our food to their friends abroad, so we also get some of the locals there,” he adds.

By yearend, the company aims to open its 100th branch, he adds.

And as they embark on growing the business for another 20 years or so, Villaluz says they are also fully prepared to embrace the challenges that come with managing a restaurant chain, especially with everybody “going digital.”

“There’s a challenge on how to stand out, how to be unique. I’d say we’re fairly new to digital marketing, but we’re there, and we’re definitely going to boost it more,” he says.

Still, some things will never change, Villaluz adds, like the company’s attention to detail when it comes to updating their stores’ look and menu.

“Whenever we renovated, we felt an increase [in customers]. You have to update the look to stay competitive,” he says. “And the menu is like your business card, really, [so you have to study] the way it’s laid out, the printing, the price. Even the arrangement, you study that.”

The most important detail in their business, of course, also remains the same as it was 20 years ago: that of always providing customers with the best and most “festive” Filipino dining experience.

“We offer a wide variety, and the combinations of our items are a little bit more festive. And since the Filipino culture involves sharing [food], you get to sample more, which makes our dining experience a little bit more exciting,” Villaluz says.