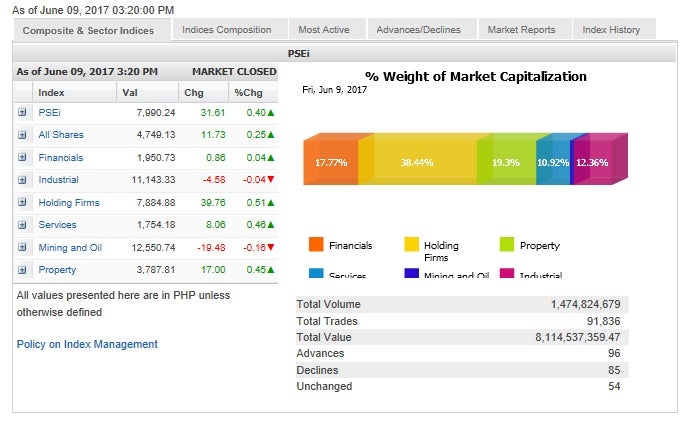 Today, the stock market is on holiday as the Philippines celebrates its Independence Day.

Last week, the Philippine Stock Exchange index rallied by 1.04 percent week-on-week to close on Friday at 7,990.24, as investors are optimistic about the legislation of the tax reform package, revenues from which are needed to fund the Duterte administration’s “build, build, build” infrastructure commitment.

“The PSEi is currently trading at 19x PER (price to earnings ratio), the highest among peers, but we think that the premium is deserved because of above-average economic growth,” Papa Securities said.

A price to earnings ratio of 19x means that investors are paying 19 times the money in terms of earnings per share that they expect to make from this market.

In a research note on Friday, Papa Securities said several macroeconomic indicators pointed to further strength in the economy that should support continued investment inflows and index rise.

On the other hand, the brokerage said higher capital goods imports and investments would likely widen the country’s merchandise trade deficit, While remittances, income from business process outsourcing, and tourism will offset some of the trade deficit, the current account surplus is seen to remain soft this year.

“Meanwhile, fiscal policy remains accommodative and the government plans to ramp up infrastructure spending to 3 percent of GDP (gross domestic product) this year, which may provide stimulus to the economy,” Papa Securities said.

“Despite expectations of a larger government budget deficit we are not worried as there is enough fiscal space for any borrowings should the need arise. External and overall debt ratios have come off from their high levels of 60-70 percent in 2003 to 24.5 percent and 42.1 percent, respectively, as of full-year 2016.”