Where GenXers and millennials gather to eat, drink beer 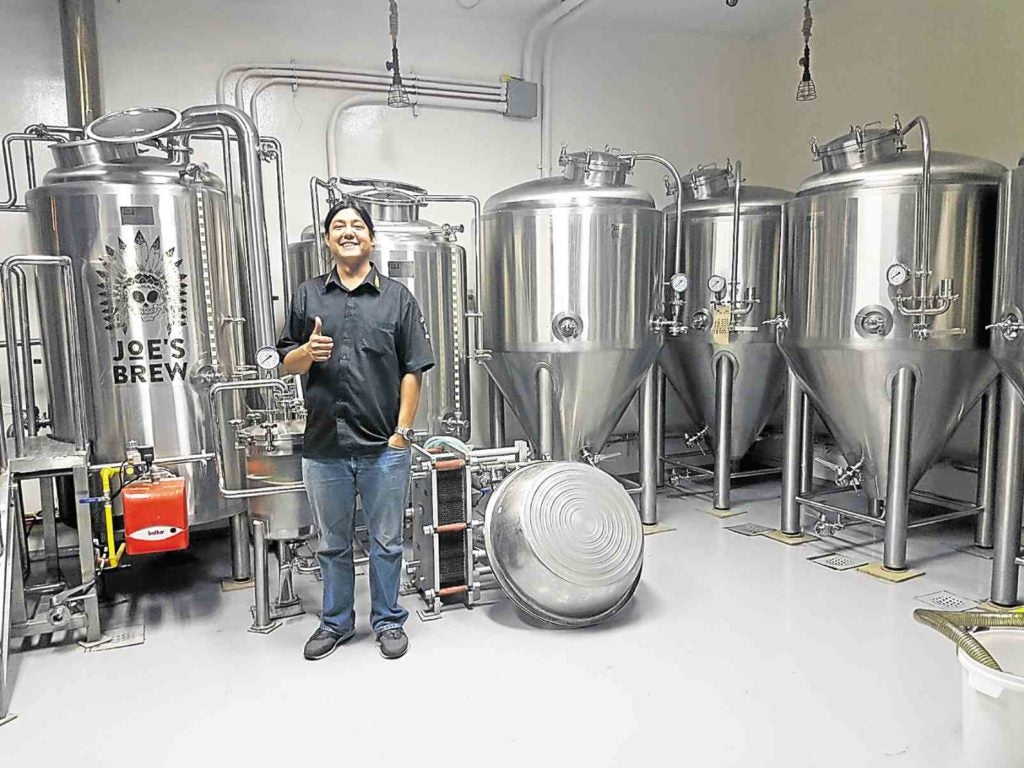 On a summer day last May, I was to catch up with my old friend, The Virgin Mare, at Holy Smokes in Poblacion by Paolo Quimson and wife.

Poblacion is the latest food district to sprout in Makati. Some call it Backwell (at the back of Rockwell), others call it Williamsburgos—a reference to Brooklyn’s Williamsburg.

As I approached the designated address, Matilde corner Jacobo Streets, I walked up the steps of what I thought was Holy Smokes. There was no name on the signage, just the image of what looked like an American Indian … who looked holy, liked to smoke and eat smoked meats.

When I peered through the glass window of the door, I saw iconic food photographer Neal Oshima. The place was closed, it was before 5:00 p.m., but Neal was having a beer inside. Not one to be left out of a party, I knocked and waved.

“Is this Holy Smokes?” I asked, greeting Neal. “No,” he said, “this is Joe’s Brew. Holy Smokes is next door but still closed as well.”

Before I knew it, I had a glass of Joe’s Brew pale ale in my hand. Something a little sweet, a little bitter, very flavorful, reminiscent of the draught beer at Grappa’s, back when it was still on Reposo.

After finishing my drink, we moved to Holy Smokes next door, a ribs dive for the sosyal. You order turo-turo style at the counter then bring your cafeteria tray to your table.

I was sold on the beef brisket (although the place is known for its pork and beef ribs), slow cooked for almost 16 hours to achieve an incomparable tenderness. Devour this with their Cajun rice. But eat the chili con carne on its own since it’s pretty good, too.

You can order Joe’s Brew at Holy Smokes. Although having the smoked meats before you drink or when you are drunk seems a better idea.

At Joe’s Brew, drinking is serious business. I suggest to move to Joe’s and not have the beer at Holy Smokes for full appreciation of the beers, even if the space is uber tiny.

Joe, or Joey Viray, is a beer geek. “You need to watch the documentary How Beer Saved the World,” he said as we got curious about making craft beer. It’s a documentary on the trade.

Joe is a filmmaker by education and profession. He was the director and cinematographer behind the food show of Chef Hylton Le Roux, among other projects. But he got bored or tired and moved to the US to reboot. While on retreat, he got really enamored by the nuances of making beer that he started making his own.

He continued the craft when he got back to Manila. In a few years, he purchased the proper equipment and now he has his own brewery in Poblacion, with five labels to his name and more being developed for greater production and distribution.

You can have a try of these blends by ordering a flight of beer at Joe’s Brew. You get four glasses for only P300. These include the Fish Rider Pale Ale, Soothsayer Pale Ale, Sierra Madre Wheat Ale, 34th Pursuit IPA, Sun Sweeper Double IPA. These are also distributed in bottles at select restaurants. Also on draught, but only available now at Joe’s Brew in Poblacion, are the Poblacion Common and Meet Joe Black, a sweet stout.

It’s a great way to experience beer, from sweet to bitter (like marriage, maybe?). “Start with the lightest to the darkest in color,” he instructed as we went through the flight. Joe suggests to start with the Poblacion Common, then have the Sierra Madre, Soothsayer, Fish Rider, 34th Pursuit, Sun Sweeper, and end with Meet Joe Black.

“The beer is sweet because I get the non-fermentable sugars also,” the beer geek explained as we started our flight. “But I add the hops for flavoring and aroma.” 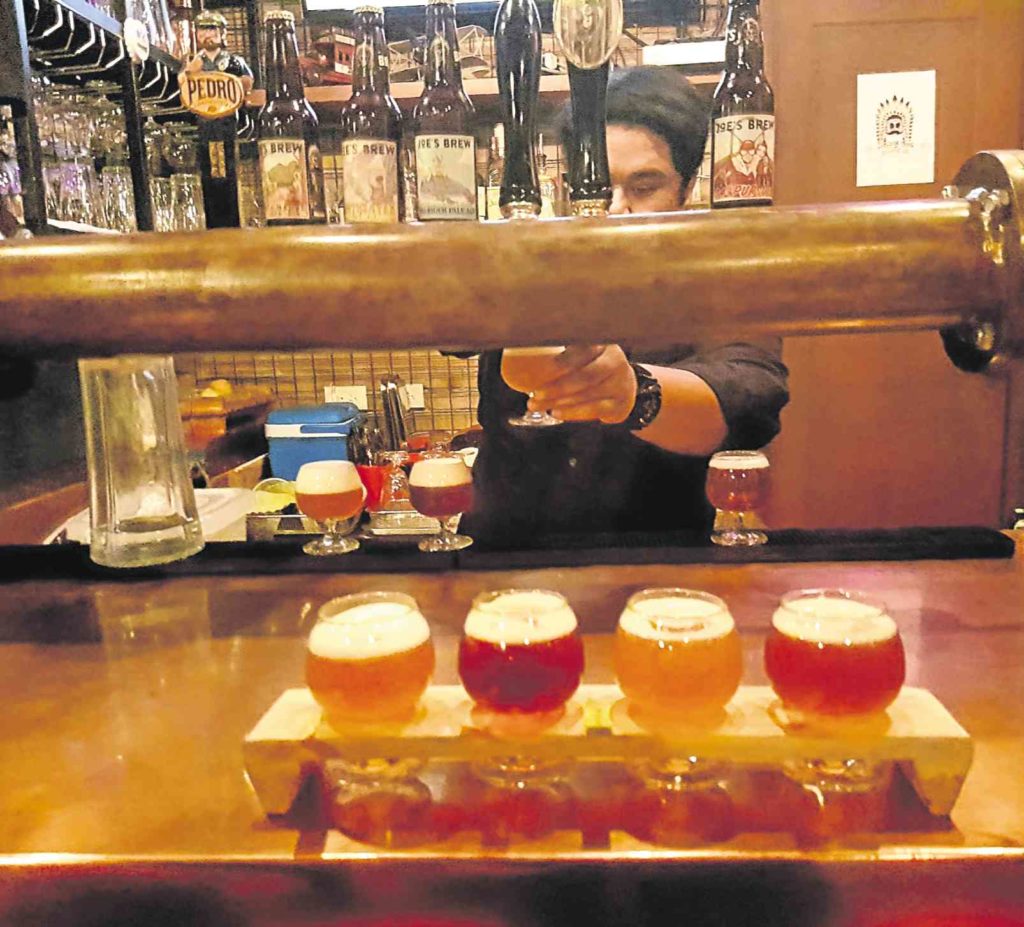 At Joe’s Brew, you can order a flight of beer for only P300 to have a taste of their different craft beers.

Joe’s Beers are also now available at Tambai, on the other side of Poblacion, across El Chupacabra, which started the resurrection of the Nakpil vibe in Poblacion (sorry for the reference that maybe only Gen Xers will understand).

I remember coming to Chupacabra several years ago, invited by Malu Gamboa, once a regular. “Please don’t write about it,” she said. “Let’s keep it this way muna,” meaning it was raw, unperturbed by rest of humanity. There was a lola dancing salsa in the middle of the room. Chiqui Mabanta was making sure everyone was having a great time. And party gal Gai Olivares was giving life to our table. The barbecues were only P10 each.

Melvin Viceral was a self-proclaimed tambay (regular) at El Chupacabra and who often bought cigarettes at the sari-sari store across the street. Soon enough, he became friends with the store’s “manang”, who also happened to be the owner of the house of the store stand. Now he has taken over the store space with his Japanese-inspired pub, Tambai.

The place reminded me of Tengu in Chiyoda-ko, Ambeth Ocampo and Fumi Terada’s favorite neighborhood yakitori joint in Tokyo. Distressed so you can de-stress.

And who have come here to just hang out? Oh, just, you know, Spain’s best and coolest chefs: Andoni Aduriz and Elena Arzak, who were introduced to the place by their friend, chef Fernando Aracama.

The second floor is now a collaboration between Tambai and Joe’s Brew, care of Joey’s brother Marco Viray. There, you can appreciate the food by chef Jerome Valencia while having awesome craft beer. There are hipster items such as bacon-wrapped kwek-kwek. But aside from the sticks, order their soft shell crabs, one of the best items on the menu.

If you are after food in other parts of Poblacion, aside from Bistro Manuel of Ariel Manuel (of Lolo Dad’s), try the menu of Niño Laus at Alamat. Those who have been following his career might remember him from In Yo, a Japanese fusion restaurant in Quezon City, which has become Ninyo. He was also a speaker at the last Madrid Fusion Manila.

Niño is known for his creativity in the kitchen but his style does not compromise on taste. At Alamat, he continues to excel, presenting Pinoy streetfood in a different, creative light.

He puts skewered pork on top of a bed of tuna ceviche. He puts skewered beef on top of laing. Chicken wings are served with a side of Mindanao-inspired burnt coconut meat called piyanggang. And Ilocos-inspired papaitan is given a twist with cacao from Davao. The guy is on a roll!

All these can be appreciated with craft beers from their bar, including those from Baguio Craft Brewery and even Joe’s Brew.

Alamat is located beside another ribs place, Smokeyard (easy to appreciate although deceptively expensive) and the millennial favorite, Bucky’s—known for its brownies and soft serve ice cream, but also serving a mean fried chicken and grilled cheese sandwich.

On the other side of Alamat, past Z Hostel, is a Lebanese shawarma joint, Yalla Yalla, which is not exactly representative of all the great flavors of Lebanese cuisine but the limited menu may work well when you are drunk from all that craft beer.

Further down the road is my favorite Korean restaurant, reviewed in the Sunday Inquirer Magazine maybe ten years ago, Jumong. I’m happy to note that it is now open 24 hours.

Meanwhile, over on Polaris is the artisanal cafe Commune and just recently, a tiny all-day breakfast place called Bean & Yolk.

From the days of just El Chupacabra and Señor Pollo, Poblacion has become a real community. Restaurant owners know and support each other, personally tending to their bars and hopping over to their neighbors’ restaurants just to hang out. Professor Nina Tesoro, now a Poblacion resident and my tour guide, says you can just walk or bike from one restaurant to another, weather-permitting.

It’s just like the old days of Nakpil when you walked from Armas to Penguin to Sala to Insomnia to Verve.

If you belong to Generation X, you will love it here. You may feel younger, or older hanging out with the millennials. But it’s all good, especially with a glass of Joe’s Brew.