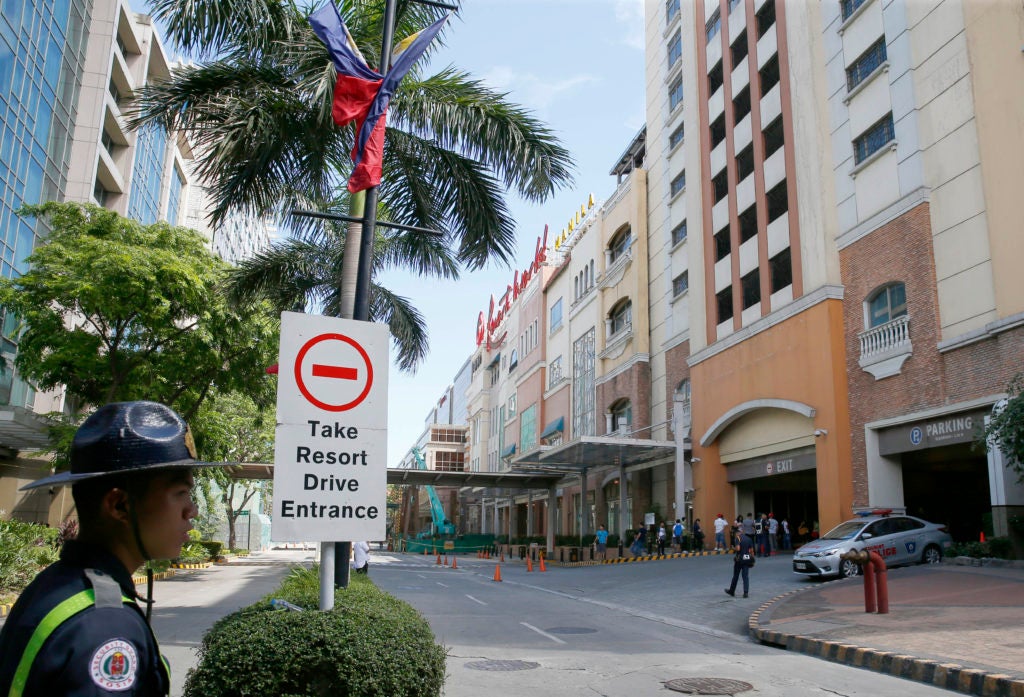 A private guard stands by the cordoned off Resorts World Manila complex on Saturday, June 3, 2017, a day after a gunman stormed the crowded Manila casino in Pasay city, southeast of Manila, Philippines. Police say a gunman stormed the crowded casino resort and used gasoline to set gambling tables on fire, creating clouds of smoke that swept through the crowds and killed dozens of people. (AP Photo/Bullit Marquez)

(Updated, 5:18 p.m.) The regulator of the Philippine gaming industry on Friday suspended the license of Resorts World Manila pending the results of a probe into the June 2 incident where a lone gunman stormed into the casino hotel in Pasay City and set fire to the premises, resulting in 38 fatalities.

In a text message to the Inquirer, Philippine Amusement and Gaming Corporation (Pagcor) chair Andrea Domingo said the agency’s board has served Resorts World Manila president Kingson Sian a “cease and desist” order for all its gaming operations.

The order will be in effect “pending investigation and final determination” by Pagcor of the casino operator’s liability for the incident and “compliance with all security, safety and gaming operations requirements,” Domingo added.

Resorts World has yet to commence operations since last week’s incident, but other hotels in the property development owned by tycoon Andrew Tan – namely Marriott, Remington and Belmont – are operating. Only Maxim’s hotel, where the assailant burned himself to death, the casino and the shopping mall are closed.

In a Facebook post on Friday, Resorts World said it had decided to remain shut at least until June 15 to help ensure that all safety issues have been addressed before it resumes business operations.

Earlier, Pagcor said the tragic event “shows the vulnerability of our institutions in the face or any form of terror attack.”

As such, the gaming regulator said there is a need “to strengthen security and safety measures and protocols – especially in tourist areas and public places.”

“Pagcor, as a responsible corporate citizen is committed to implement the highest security standards both for its licensed operators and its own gaming operations,” it said in a statement.

Prior to the Resorts World incident, Pagcor said it had issued a security advisory to all its licensees and gaming site operators to increase security preparedness in their respective areas to ensure the safety of employees and guests. It also reminded operators to abide by the curfew rules and other ordinances that may be issued by the local government units where they are situated. This advisory was issued in the light of the terrorist activities in Mindanao.

“However, since police investigation was on-going during the weekend, we could not access the crime scene and provide full account on the matter instantaneously,” it said, adding that the casino operator had initially provided only a “sketchy account of what transpired.”