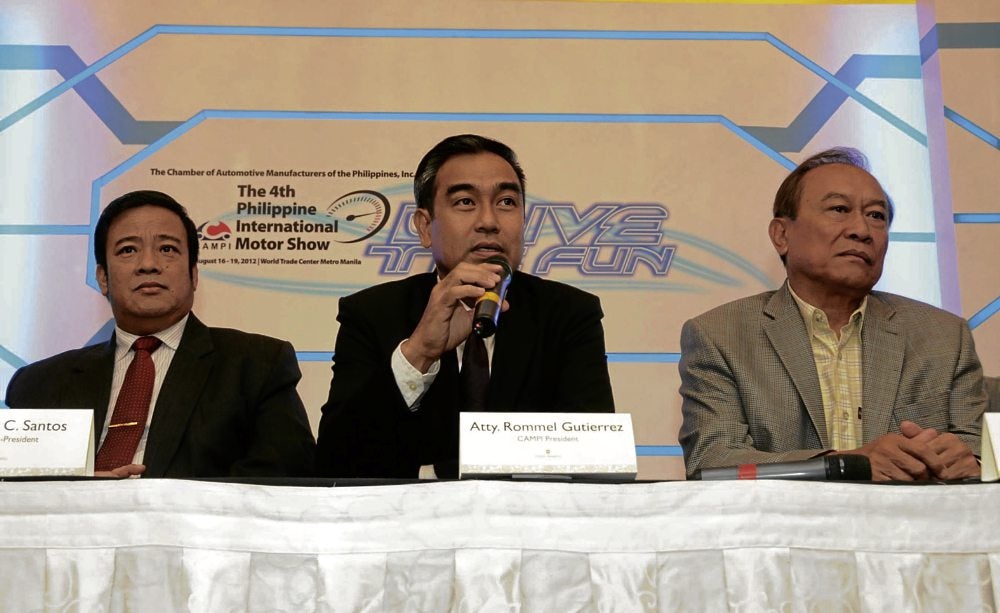 Auto industry players said the Department of Finance was sending a wrong signal to investors with its plan to raise excise taxes on vehicles, even as the government maintained that higher prices would not necessarily deter purchases.

“Campi (the Chamber of Automotive Manufacturers of the Philippines Inc.) fully supports the initiative of government to raise revenues to build infrastructure. However, Campi does not support the version of DOF [the Department of Finance]. We feel the rates are too high and unreasonable,” Campi president Rommel Gutierrez told the Senate ways and means committee chaired by Sen. Sonny Angara during the hearing on the proposed adjustments on vehicle excise taxation.

Asked by Angara if Campi was amenable to House Bill No. 5636 approved by the Lower House last week, which contained five tiers, Gutierrez replied that “it’s not exactly the position of the industry but it’s a better version than the original proposal of the DOF.”

HB 5636 staggered the increase in automotive excise taxes into two phases starting next year until 2019.

For next year, excise taxes will go up to 3 percent from 2 percent at present for vehicles whose net manufacturer’s price/importer’s selling price is up to P600,000.

Vehicles priced over P3.1 million, meanwhile, will be taxed P1.468 million plus 90 percent of the value in excess of P3.1 million.

According to Gutierrez, auto firms’ principals abroad wanted a consistent policy on the automotive industry, citing that while the government had established the Comprehensive Automotive Resurgence Strategy (Cars) program to strengthen manufacturing, the proposed higher excise taxes could derail it.

“We feel that the DOF’s proposal is sending a wrong signal to investors,” Gutierrez said.

“The industry is quite concerned about this proposal of the DOF. The rates that they are proposing would curtail the growth of the auto industry. The Philippines is very much in the radar of the Asean automotive industry because it’s only the Philippines that shows positive growth figures among Asean countries. We want to keep this momentum. We feel that this change in excise tax, particularly the proposal of the DOF, would really hurt the industry. We support the passage of this excise tax but at reasonable rates,” according to Gutierrez.

“It is designed so that we will have significant reduction in income taxes, therefore increased income, therefore we’ll also drive consumption,” Chua said.

The Finance official also noted that buyers decide to purchase vehicles not just because of their prices. “It is also the income effect, the financing cost, the preference and even personal choice. We should look at this in the bigger picture,” Chua said. JPV