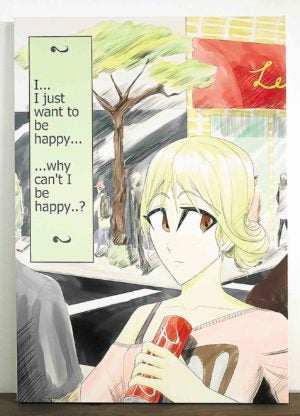 The mangaka (Japanese comics artist) invites us to view his works.

But instead of meeting a scruffy bohemian in grunge at the WeCube gallery, we are greeted by a young gentleman in a dark suit, as if he were to welcome a high net-worth client at the bank.

That gentleman is Ramon Rodrigo Kalaw Cuenca, a certified risk-taker.
He chucked in a stable job as a stock analyst at the Bank of Singapore—as the cliché goes—to find his meaning.

He’s been trying to make a buzz with his brand/media vehicle/website called Artandfinance.net, and eventually profit from his merchandise: Manga art, inspired by the famous Japanese comics.

Born in 1984 in San Francisco, Cuenca describes his education as “US-centric”-boarding school, International School of Manila and University of Chicago, majoring in international political economy.

He started as an investment counselor at Bank of Singapore (formerly ING Asia Private Bank) in Manila then was transferred to a stock analyst position at the Singapore headquarters.

Between studying and taking exams to be a Chartered Financial Analyst (CFA), he would return to his favorite activity and enrolled at Nanyang Academy of Fine Arts. Three years ago, weary of the routinary yet ruthless corporate world, he returned to Manila to pursue his dream.

“I thought this was a good opportunity for me to go out on my own, and try something new,” says Cuenca. “If you’re going to start your own business, you’d better be different from everyone else. The idea is, the fewer the competitors, the better.”

He then set up Artandfinance.net, a multimedia venture that offers vlogs, web comics and fine art for global professionals.

Cuenca compares his business to tech startups that has gone on to become profitable—complete with the story line of an outlier about to change the world right at his or her parents’ basement. “They started on their parents’ basement. This is a multimedia brand and I’ve been working in my parents’ house. They have been kind enough to subsidize me so they are my angel investors,” he says.

His parents are businessman Roberto Cuenca and Chingbee Kalaw (the daughter of the late senator Eva Estrada Kalaw).

Any rewards for parents taking a risk?

“We never formally spoke about rewards, but one of my life goals is to provide a comfortable living for them when they are older,” he says.

His website includes a section for the layman, “A Quick Intro to Business” which explains terms such as risk and rewards, micro and macro economics and stock analysis. Then there are vlogs (the most popular was his travelogue of Japan, coupled with his take on the country’s economy) and web comics about young people in the world of business and finance.

Meanwhile, he pursued his enthusiasm for manga. 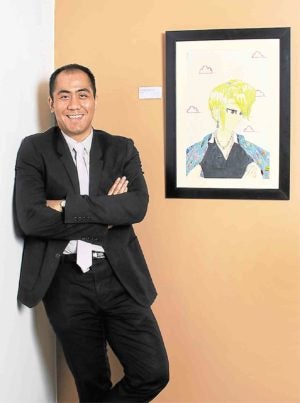 The recent Art Fair Philippines inspired him to hold an exhibit. “There were some stuff that were very similar to what I was doing, and they were sold for a lot of money.”

Cuenca then bravely put up an exhibit of 20 manga artworks, at prices ranging from P15,000 to P30,000. Many were snapped up on the opening day.

During the opening, Cuenca also ended up making a business presentation.

“I told the buyers that they were investing in my brand, basically. It’s almost like buying stocks in a company because you pay for the investment. In this sense, instead of buying a stock, you’re buying as physical asset a fine art. Assuming I’d do better—successful in developing my brand and my business—the value of the art goes up.”

Asked how manga is seen as investment in the Philippines, Cuenca replies, “Art in general is amorphous. The market value of art is based purely on perception. This is in contrast to the market value of a stock, which can fluctuate, based on future expected cash flows that the business can generate.”

“Successful artists are good at networking, branding and marketing, or at least, they have a good agent. That might be a possible way to decide which art to buy if you are looking at art from a purely investment standpoint. Intangibles such as branding and marketing are crucial to Artandfinance’s success as well.”

Still, Cuenca considers his manga as food for the soul and not just a physical asset. “I’d rather offer something unique that has a hardcore following than becoming nondescript. The key to both art and business is that you convert enough people who really like your stuff so that you can make a business out of it.”

His experience in the banking world is helping him as an artist. He realized the importance of being resolute or holding one’s ground.

Cuenca explains, “You are dealing with other people’s money. Clients and relationships may question whether you are giving the proper advice to buy, hold or sell a stock. It’s more of an emotional rather than an intellectual learning experience since you develop a thick skin. This experience has helped me now that I’m an entrepreneur. I need to be thick-skinned [here], too.”