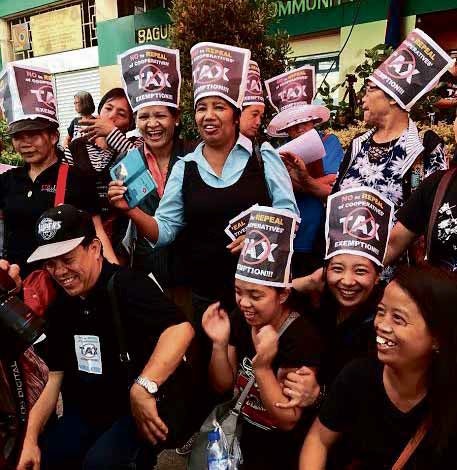 Wearing paper hats that say, “No to repeal of cooperatives’ tax exemptions,” members of a Baguio cooperative pose for photographs after staging a rally on Saturday against congressional measures that imperil the tax privileges of all cooperatives.About a thousand members of local cooperatives in Baguio City joined the protest rally.Aseparate rally was staged in La Trinidad town in Benguet province. —(FILE PHOTO BY VINCENT CABREZA / INQUIRER NORTHERN LUZON)

MANILA — The Department of Finance will seek annual audits of all cooperatives in the country if Congress keeps their exemption from the value-added tax (VAT) under the first tax reform package.

Asked if the DOF would appeal the House pf Representatives leadership’s plan to retain cooperatives’ VAT exemption, Finance Secretary Carlos G. Dominguez III told reporters: “If that’s the wish of the representatives of the people, we have to honor it.”

“However, I have also asked the congressmen that if that’s the case, then they also allow the BIR [Bureau of Internal Revenue] to audit each and every cooperative once a year, because we have a lot of doubts whether all the cooperatives are actually valid,” Dominguez said.

The finance secretary pointed to practices of some cooperatives that he deemed as “against the principles of cooperativism.”

“We have seen a cooperative providing manpower where the CEO can fire  their members. That goes to show that it’s probably not a real cooperative. There’s a cooperative buying schools; I find it hard to believe. I also understand that some hospitals are cooperatives—you go in sick, you come out a member,” Dominguez noted.

“So we should have a way of weeding out people who avoid taxes by pretending to be cooperatives. I hope the legislature will accept or put a provision that the BIR should audit them at least once a year,” Dominguez said.

“It’s really unfair for people who pay taxes [while there were] people who are smart enough to organize themselves into cooperatives and don’t pay the tax. I’m not against the cooperatives; I’m for fairness for everybody,” Dominguez said.

The 9,431 registered cooperatives in the country have 7.6 million members, of which about 4.2 million “belong to rich cooperatives that have annual gross sales of over P5 million” each, according to Finance Undersecretary Karl Kendrick T. Chua.

At present, cooperatives enjoy exemption from the 12-percent VAT, but the perk would have been removed under House Bill (HB) No. 5636 or the substitute bill containing the DOF’s first tax reform package that was consolidated with other tax measures pending in Congress.