Scientists, consumers ask Meralco to pay up billions of pesos in debt 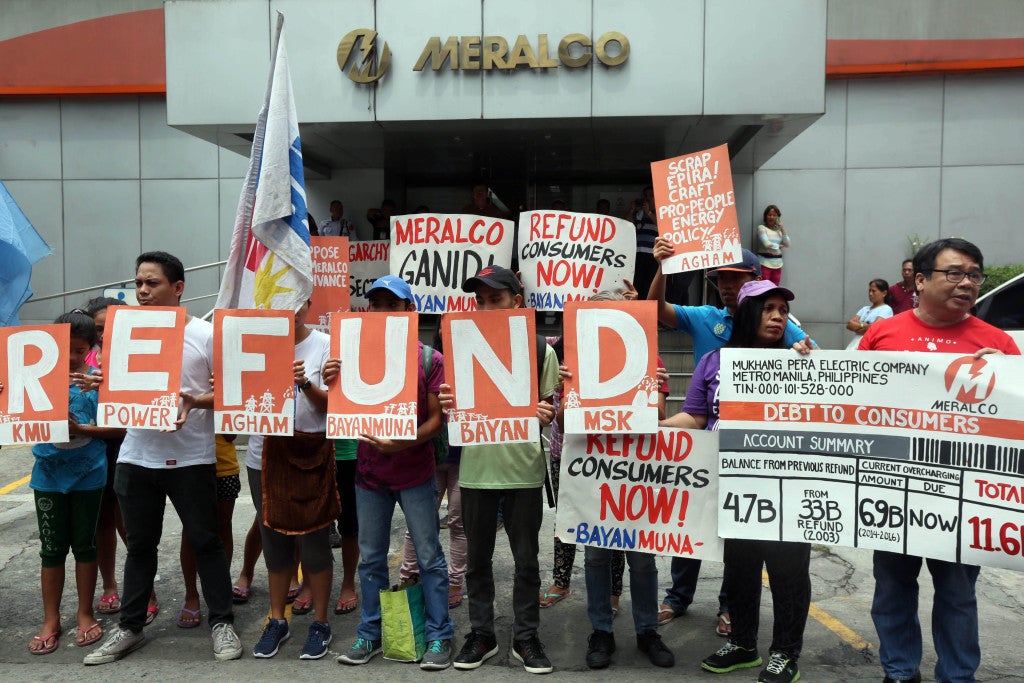 Groups demanding Meralco to pay up its debts to power consumers held a protest rally Wednesday morning in front of the power distribution company’s branch office in Kamias, Quezon City.

In a symbolic billing statement that the protesters issued to Meralco, the scientist activist group AGHAM-Advocate of Science and Technology for the People together with the consumer group People Opposed to unWarranted Electricity Rates (POWER) slammed what they claimed as the firm’s corporate greed as evidenced by its repeated overcharging to the consumers currently amounting to more than P11.6 billion. They also decried the alleged anomalous midnight deals between Meralco and seven coal-fired power generation companies.

“Meralco’s abuse of the consumers for profit is in its peak. With overcharges from 2014-2016 amounting to P6.9 billion and an additional P4.7 billion left from overcharges that date as far back as 2003, the total debt of the power distribution company to its consumers amounts to as much as P11.6 billion, disregarding over a decade of inflation and use of the fund for Meralco’s profit,” said Finesa Cosico, AGHAM Secretary-General and POWER Co-Convenor.

In 2003, the Supreme Court ruled that Meralco should not pass on its income tax to consumers and ordered the company to refund a total of P33 billion in overcharges. However, an estimate of 820,000 consumers have yet to receive the refund totaling up to P4.7 billion until now, the protesters claimed.

“Adding to Meralco’s billions of pesos in debt to the consumers is its signing of anomalous Power Supply Agreements (PSAs) near the end of former President Aquino’s term. These midnight deals were made with 7 coal-fired power generation companies, where it was found that Meralco either owns or has significant shares in 6 out of the 7 companies,” Cosico alleged.

Each PSA secures 20 years of exclusive pact between a distribution utility and a generation company, creating a condition for connivance between the two to ensure that the price of electricity remains high.

The protesters said the 20-year contracts also lock the country in the usage of a single source of power. The 7 PSAs included in the midnight deals all use coal as its primary source of power, resulting in a total of 3,331 MW of plants set to be constructed. This is despite the Department of Energy’s Philippine Energy Plan which puts forward an energy mix to cope with the effects of climate change.

“The corporate control of the power industry enshrined in the Electric Power Industry Reform Act (EPIRA) has allowed private entities such as Meralco to carry out such abuses to the consumers. Aside from our immediate calls of a one-time refund of the P11.6 billion worth of overcharges and a review of Meralco’s midnight deals with the 7 generation companies, we also urge President Duterte to consider the appropriation of Meralco’s assets in the power industry,” said Cosico.

“The government’s seizure of Meralco’s assets can serve as a way to ensure the welfare of the consumers while the current liberalized power industry under EPIRA is yet to be reversed. We call for the crafting of an alternative energy policy that espouses a pro-people, pro-environment nationalized energy industry geared towards the needs of the country for national development,” ended Cosico.