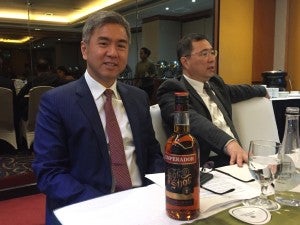 Tycoon Andrew Tan-led Emperador Inc. has unveiled a P5-billion two-year share buyback program to perk up “undervalued” shares as the group continues to expand its local and international businesses.

“It’s a good signal that if we have excess cash that we want to invest, we might as well invest in our company because we believe in our own story,” Kingson Sian, director at Emperador and president of its parent company Alliance Global Group Inc., said in a briefing after the liquor firm’s stockholders meeting on Monday. “It’s probably one of the better investments out there.”

“We believe it’s seriously undervalued that’s why we have embarked on a share buyback program. We believe that with P5-billion allotment, we can create shareholders value and bring the value to where it has to be,” Emperador president Winston Co said during the company’s stockholders meeting.

The company, currently valued by the stock market at around P103 billion, is the world’s largest brandy company that owns Spanish brandy and sherry brands led by the iconic Fundador as well
as Scotch whisky brands led by The Dalmore and Jura.

In the first quarter of this year, Emperador grew its net profit to P1.5 billion, 7 percent higher than the level in the previous year on the back of higher contribution from international operations., which now account for about a third of total business.

Consolidated revenues reached P9 billion during the first quarter of this year, marking a flat performance compared to the same period last year. However, Emperador eked out higher margins for both international and domestic operations.

Emperador is also expanding its product portfolio for the domestic market.

The recently introduced into the market Andy Cola, a ready-to-drink mix of cola and homegrown whisky Andy Player whisky. Priced at P27.50 per 330-ml bottle, the new product targets the young and upwardly mobile consumers in the Philippine market.

Another new product Hotshot Brandy, described as the “hottest ever” Emperador variant where the
classic taste of Emperador brandy is “super-spiced.”