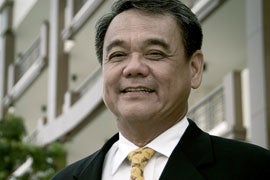 Semirara Mining and Power Corp. contributed 68 percent of DMCI’s bottom-line in the first three months. Other significant contributors were the real estate and water utility businesses, which respectively accounted for 16 percent and 8 percent of net profit.

Excluding the impact of a one-time gain of P111 million booked in 2016 for the partial sale of its stake in Subic Water, DMCI’s core net income improved by 26 percent year-on-year.

DMCI chair and president Isidro Consunji said: “2017 will be a better year for us. We expect double-digit growth from our energy and real estate companies, and modest growth from construction and nickel mining.”

If annualized, the first quarter net profit will translate to an average return on equity of 20-23 percent, based on internal estimates.

For the first three months of the year, Semirara recorded a 52-percent surge in net income to a quarterly record high level of P4.42 billion. This was driven by the 24-percent increase in coal sales volume, further sweetened by a 41-percent improvement in average coal prices.

Semirara’s strong performance in the first quarter made up for the year-on-year decline in three-month earnings contributed by the real estate, water and construction businesses.

Maynilad Water posted a 30-percent drop in net income contribution to P282 million, as delays in the implementation of the rate rebasing tariff caused operating expenses to rise faster than revenues from water and sewer services.