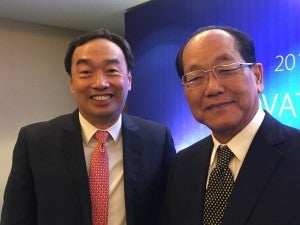 The country’s largest conglomerate SM Investments Corp. (SMIC) has unveiled a new leadership revamp with the appointment of Jose Sio as the new chair, taking over the post long held by 93-year-old patriarch Henry Sy Sr. who founded the group in 1958.

SMIC also announced the appointment of Frederic DyBuncio as new SMIC president, taking over the post held by Harley Sy who will remain as executive director of the SMIC board.

In an interview after SMIC’s stockholders meeting on Wednesday, Sy-Coson said as Sio had been with the group for a long time, Sio knew the conglomerate very well and was in a good position to take over the post vacated by her father.

Cora Guidote, SMIC investor relations chief, said Sio was “highly instrumental in supporting the phenomenal growth of SM and its subsidiaries. He instilled strict financial discipline across all businesses that later helped the company achieve optimal results even as the whole group maintained a sound and stable financial position.”

Sio said the appointments were an indication that the Sy family was keen on professionalizing the organization in preparation for the future. He added that the group was also preparing the third-generation Sys for leadership position across the group.

SMIC created the position of chair emeritus for Henry Sy Sr. He was also given a special citation and a standing ovation during the stockholders meeting.

The new SMIC chair Sio was the executive vice president and chief finance officer of SMIC for a long time. He is also a Director of China Banking Corporation, Belle Corporation, and Atlas Consolidated Mining and Development Corporation. Sio is also Adviser to the Board of Directors of BDO Unibank, Inc. and Premium Leisure Corporation.

Sio holds a master’s degree in Business Administration from New York University, is a certified public accountant and was formerly a senior partner at Sycip Gorres Velayo & Co. He was voted CFO of the Year in 2009 by the Financial Executives of the Philippines (FINEX). He was also awarded as Best CFO (Philippines) in various years by several Hong Kong-based business publications.

DyBuncio brings with him wealth of experience in banking where he spent over 20 years with JP Morgan Chase and its predecessor companies. He was assigned to various places apart from the Philippines such as New York, Seoul, Bangkok and Hong Kong and held various executive positions where he gained substantial professional experience in the areas of credit, relationship management and origination, investment banking, capital markets and general management.