How women can bridge the pay gap 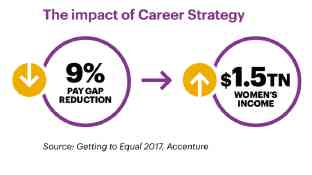 According to a recent study by global professional services firm Accenture, these three “equalizers” could be key to solving one of the most prevalent workforce issues: The wide pay gap between men and women.

In the report “Getting to Equal 2017: Closing the Gender Pay Gap,” part of the company’s celebration of Women’s Month last March, Accenture’s research reveals that globally, for every $100 a women earns, a man earns $40 more.

But then there is also the “hidden pay gap,” since women are more likely to take up unpaid work such as child care and housekeeping, and the study shows that a man actually earns $258 for every $100 a woman earns.

There is hope, however, for women, particularly female university students graduating by 2020, to close that gap sooner rather than later if, according to the study, they make strategic career choices and build their digital skills—“and if businesses, governments, and academia provide crucial support,” the report reads.

“The close in developed markets could come in 2044—(which is) 36 years earlier than previously estimated. In developing markets, female university undergrads could see the close in 2066—more than 100 years earlier,” the report also states.

The year 2044, however, is still a long way off, which is why Accenture cites the three equalizers which could, at the very least, reduce the gender pay gap by 35 percent by 2030 and add $3.9 trillion to women’s income worldwide.

Digital fluency is the extent to which people use digital technologies to connect, learn, and work. Career strategy, on the other hand, is the need for women to aim high, make informed choices, and manage their careers proactively. Finally, tech immersion is the opportunity for women to acquire greater technology and stronger digital skills to advance as quickly as men.

“Early adopters of new technology … are overwhelmingly male at the undergrad level—63 percent versus 45 percent female. And when it comes to continuously learning important new digital skills, our research shows that male undergrads again outperform female undergrads 53 percent to 44 percent,” the report states. “The message to young women, educators, employers and governments is clear: Digital fluency is vital, internet access is fundamental, and helping women make smart choices to obtain paid work is essential in closing the gender pay gap.” 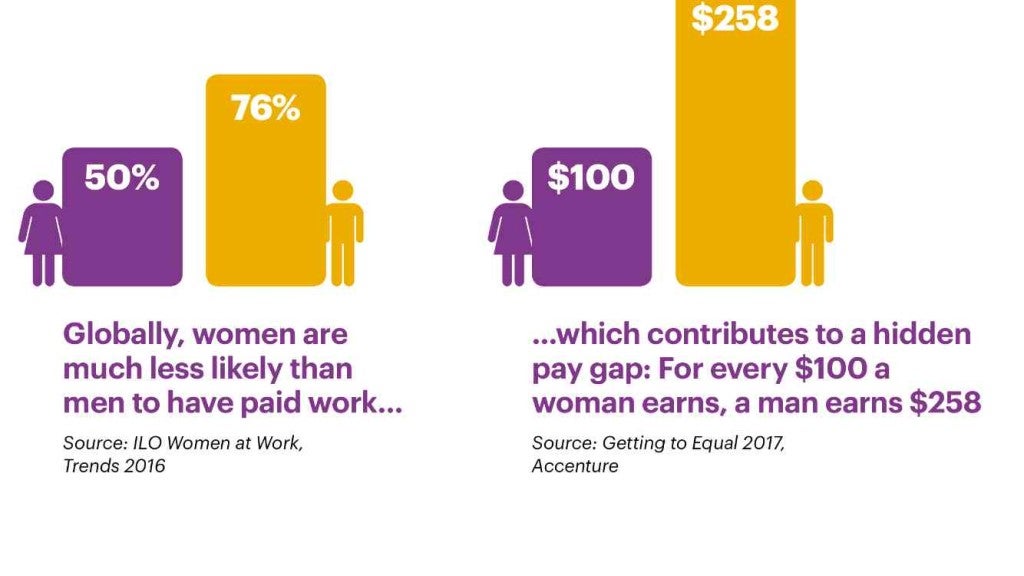 There are also nondigital factors—a career strategy that can greatly help women advance professionally. Such factors, according to the report, include: Company size (women’s salaries increase with company size at every level); full-time work (women’s hourly pay increases almost 41 percent when working full-time); family-friendly practices (women’s chances of working in high-paying industries increase 12 percent if they have flexible working hours and support to grow their careers).

The report also recommends that women focus on the following attributes to help close the pay gap: Search for a mentor; aspire to be in a leadership position; and choose an area of study that offers high potential. According to Accenture’s research, these attributes are still stronger in male undergrads, which most likely gives them the professional edge.

Lastly, the research finds that tech immersion increases women’s chances in working in high-paying industries—a feat they can accomplish by taking up more studies in the STEM (science, technology, engineering, mathematics) fields. The report notes, though, that women don’t necessarily have to be graduates of STEM courses; they could simply gain “additional exposure” by taking up training courses or working in a tech-related field—career investments which upgrade their tech skills.

These three equalizers can only do so much, however.

The combined support of businesses, the academe and government are still vital to closing the gender pay gap, the report concludes.

“Gender equality is an essential element of an inclusive workplace, and this extends to pay,” said Pierre Nanterme, Accenture’s chair and CEO. “Business, government and academia all have an important role to play in closing the gap. Collaboration among these organizations is key to providing the right opportunities, environments, and role models to lead the way for change.”