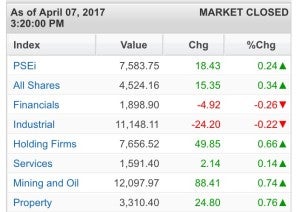 The local stock barometer rallied to the 7,600 mark on Friday but pared gains at close as investors turned jittery following America’s military air strike against Syria.

“It looks like it was risk-off today, as investors cashed out due to concerns of a retaliation against the US’ missile strike in Syria. While we ended up, it was way off the intra-day high of 7,667 – also the year-to-date high,” said Manny Lisbona, president of PNB Securities.

“Next week might see continued weakness, the magnitude of which will depend on what happens next between the US and Syria. Note that next week is also a short week, so trading will likely be subdued,” he added.

The US’ air strike against Syria, the first direct offensive against the regime of Bashar al-Assad, was in retaliation for a chemical weapons attack in Idlib.

Despite the subdued closing, foreign investors remained net buyers in the stock market amounting to P1.55 billion for the day.

The day’s gains modest gains were led by the holding firm, services, mining/oil and property counters. On the other hand, the financial and industrial counters declined.

Value turnover for the day amounted to P9.74 billion.

There were 93 advancers that edged out 80 decliners while 63 stocks were unchanged.

GT Capital, JG Summit and MPI were all up by over 2 percent while Security Bank and AGI both gained 1 percent.

On the other hand, URC tumbled by 5.44 percent after reporting a decline in profits while ICTSI fell by 2.2 percent.