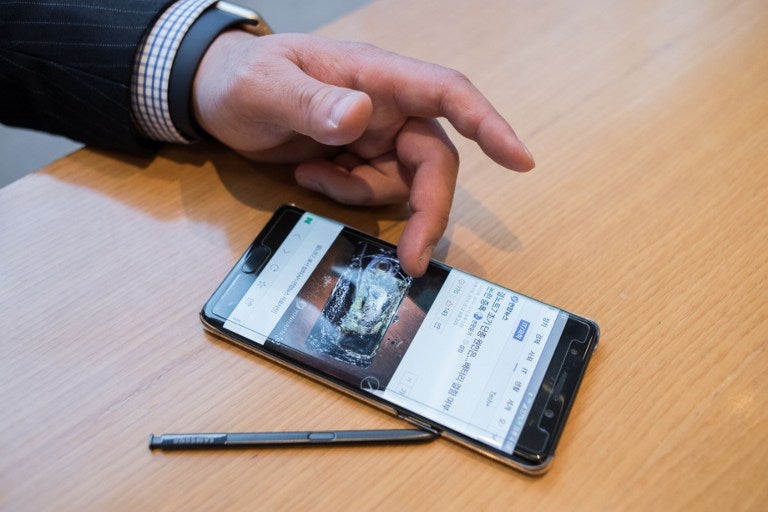 A Samsung customer browses a web page showing a fire-damaged Samsung Note 7 mobile phone, on a similar device, at a Samsung store in a mall in Seoul, South Korea in this October 12, 2016, file photo. Samsung said it would sell some of the recalled Note 7 to manage its massive stockpile. AFP

WASHINGTON, United States — Samsung announced Monday it would sell some Note 7 smartphones that were recalled for safety reasons as refurbished devices, in an effort to manage its stockpile in an “environmentally friendly” manner.

The South Korean giant, the world’s largest smartphone maker, said it would sell Note 7s as “refurbished phones or rental phones,” after consultations with regulators in various markets.

Samsung recalled an estimated four million of the flagship smartphones over concerns that batteries could overheat and burst into flames.

Authorities in the US and elsewhere banned the device from use on planes and even from being placed in checked luggage.

After an investigation, Samsung in January blamed faulty batteries for the problem.

Until now, Samsung’s plans were unclear for the recalled phones, which could pose environmental hazards if handled as waste.

A Samsung statement said that the devices would be “recycled and processed in an environmentally friendly manner” with any salvageable components detached for reuse and metals extracted by companies specializing in recycling.

“Regarding the Galaxy Note 7 devices as refurbished phones or rental phones, applicability is dependent upon consultations with regulatory authorities and carriers as well as due consideration of local demand,” the statement said. “The markets and release dates will be determined accordingly.”

The activist group Greenpeace welcomed the move, saying it came in response to months of campaigning and protests addressing the environmental impact of the recall.

“This is major win for everyone that took action, and a step towards shifting the way we produce and dispose of electronics.”

But Jan Dawson of Jackdaw Research said the decision “feels like a huge misstep” for Samsung as it readies a launch of its latest flagship handset this week.

“While the desire to minimize the environmental impact is admirable, and Samsung would no doubt benefit financially from refurbishing the phones, it would have been better off simply doing what it originally said it would and abandoning the line entirely and merely recouping parts,” Dawson said in a blog post.

Greenpeace said it would press Samsung for a detailed timeline on its efforts and step up its campaign to get other manufacturers to boost recycling and improve the handling of hazardous smartphone waste. CBB