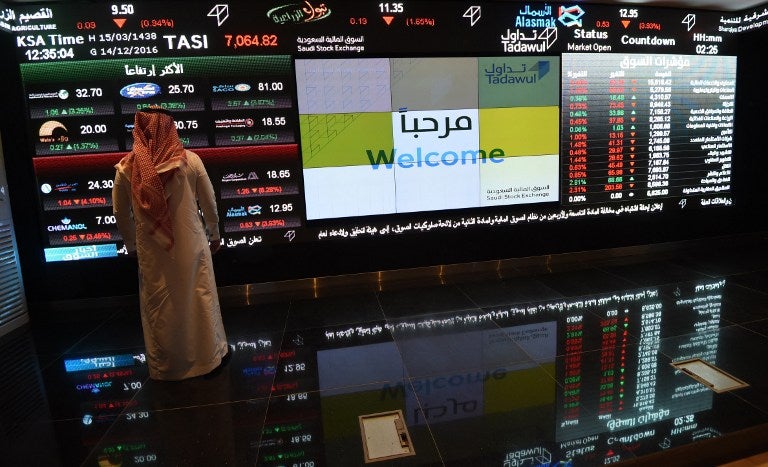 A Saudi investor monitors the stock exchange at the Saudi Stock Exchange, or Tadawul, on Dec. 14, 2016 in the capital Riyadh. AFP

PARIS, France — Saudi Arabia on Wednesday lost its high-quality credit rating from the Fitch agency, which lowered the kingdom a notch because of worsening public finances as the oil price wobbles.

Dropping its notation from AA- to A+, Fitch said it was doubtful whether Saudi Arabia could implement its reform program after a “significantly wider than expected fiscal deficit in 2016”.

Opec kingpin Saudi Arabia in December projected another budget deficit for this year, after already reporting a shortfall for 2016 in the face of lower oil prices.

It was the first budget since the kingdom, aiming for a balanced budget by 2020, announced a wide-ranging plan to wean the economy off its oil dependency.

For 2017, Saudi hopes to cut the deficit to 7.7 percent of GDP, Fitch noted, but the agency said its own projections were for 9.2 percent.

A period of sustained rises in the price of oil, of which Saudi Arabia is the world’s biggest exporter, could prompt Fitch to revise its rating upwards again, it said.

But if Saudi’s budgetary situation worsened quickly, it could suffer another downgrade, it warned.

For now, the outlook is stable, the agency said. CBB