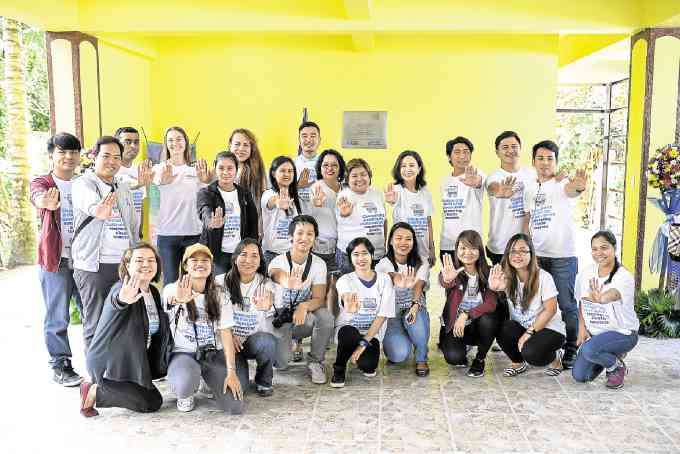 QBE employees foster the “pay it forward” attitude through volunteer work in building the Ecodemya.

Amadeo, Cavite—Soon, some 120 poor students in Cavite province will have a learning facility and a home they can call their own.

Rising in a serene and laid-back neighborhood in Barangay Halang in this coffee-producing town is the two-story Ecodemya, an environment-friendly school run by the nongovernment Dynamic Teen Company (DTC).

The DTC, a group founded by 2009 CNN Hero Efren Peñaflorida, started its “Kariton Klasrum (pushcart classroom)” in 2007, bringing education to poor communities in Cavite City. The group aims to keep children off the streets by encouraging them to return to school.

In February 2016, the DTC partnered with Australian insurance company QBE as its educational program expanded to include high school dropouts and supported students through college.

QBE provides scholarships to 45 DTC college scholars in Cavite and Metro Manila, and to victims of Supertyphoon “Yolanda,” which devastated Tacloban City and the rest of Leyte province in 2013.

Launched last Jan. 27, Ecodemya will cater to incoming senior high school (SHS) scholars in Cavite. It has four classrooms, a greenhouse garden, water cisterns to collect rainwater, and solar panels to generate electricity. There are also huts for some of the orphaned students.

Peñaflorida said the 3,000-square meter property was donated by a group of Japanese companies.

“It really is conducive for learning. Away from the city, we aim to reach the child’s full potential through the combination of educational curriculum and the environment,” he said.

The DTC follows a four-phase strategy, starting with the Kariton Klasrum for gradeschoolers, the Learners’ Educational Aid Program (Leap) for high school, the Support for Tertiary Education Program (Step), and the Formal Admission to Career and Employment (Face).

When the government rolled out the K-12 basic education program in 2012, the DTC saw an opportunity to include those taking up the additional two years in high school.

“We talked to some of the principals [here] and they said many are dropping out by Grade 11 … because schools [offering SHS] are too far,” he said.

Aside from the mainstream curriculum, the DTC also practices the “peer-effect” education where students learn by sharing their experiences.

Peñaflorida said Ecodemya classrooms, for instance, are designed where chairs can be moved around freely so students feel comfortable sharing their personal knowledge from their communities.

“Learning is not confined inside the classrooms. We want them (students) to be empowered by one another, build a culture of building each other up instead of pulling [another person] down,” he said.

Another important component of education at DTC is cultivating the “pay-it-forward” attitude, Peñaflorida said. He said their students, as young as they are, are taught the value of helping the less fortunate.

The construction of the P4-million Ecodemya started in April 2016. Apart from the funding, QBE also sent their employees to help in construction.

With 3,000 employees, Batungbacal said the company wanted to foster the culture of “giving back” by donating their time to charity work.

“It’s a moral obligation to give back for being blessed enough to be employed,” Batungbacal said.

She said QBE employees were in fact happy to do so, carrying gravel and hollow blocks to build the Ecodemya, that asking volunteers to sign up was like “selling out concert tickets.”

As of 2015, DTC had helped seven poor students complete college and 75 out-of-school youths return to schools.

Asked what DTC’s primary criteria is in selecting scholars, Peñaflorida said: “Their passion for learning.”