Want to build your team? Try going to the kitchen 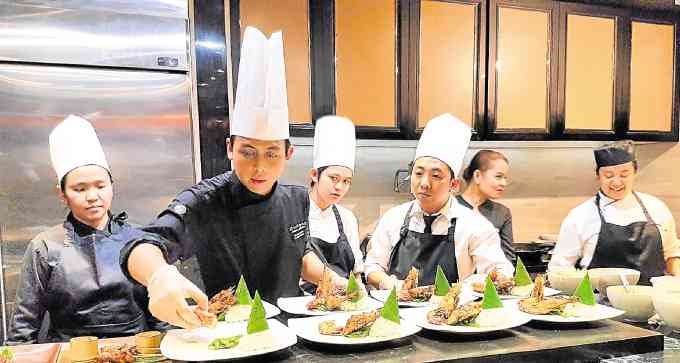 Thinking of what to do for your next team building session? Sure, you can go to the beach or somewhere outdoorsy and do the usual—lead a person blindfolded for trust, ask them to jump backwards to be caught by the rest of the team, etcetera, etcetera.

But with global warming making the outdoors too hot to handle, why not relocate to where your team can take the heat: the kitchen!

I just found out that Sofitel is now offering a “chef’s table” where a minimum of 10 people can have the Davao-Boracay Showroom Kitchen right beside Spiral all to themselves not just for a private dinner with a chosen chef but also for private cooking lessons.

And since Spiral has the “Flavors of the World” to offer, you can choose what cuisine you want to learn—Japanese, Chinese, French, Indian… you name it.

This week, we were invited by Sofitel’s gregarious Yasmine Hidalgo to try Indonesian cuisine cooked by Indonesian chef par excellence Pradipta Bayu Primaputra, who was flew in all the way from the Pullman in Jakarta. I drove over faster than you can say “Indonesia” because I am obsessed with Southeast Asian, especially Indonesian flavors—chili, turmeric, candlenut, kaffir…

I thought it would be just another fancy sit-down dinner so I was surprised to find myself in the function room just off Spiral, the Davao-Boracay room, seated in front of the chef who was cooking right before our eyes as we ate.

The drive was worth it. Chef Bayu, who hand-carried Indonesian peanuts and pastes just for the dinner, presented a hearty five-course meal that served as a food tour of Indonesia.

He started with a Jakarta favorite, gado-gado or boiled vegetables served with a flat cracker with Indonesian peanuts and kaffir on top, and an addictive, earthy peanut sauce for contrast.
“I brought the peanuts because our peanuts are different from your local peanuts,” he explained. (It’s true. Our peanuts are smaller and sweeter—like us.)

It was one of those dishes with so many flavors going on that you can’t even begin to describe what it takes like, only to say, “Mmmm!” I especially loved the kaffir’s little cameo in the cracker, whose role was so small yet its voice was definitely heard.

He then went to a classic Indonesian dish, the sate. This version, sate lilit, was inspired by Balinese cuisine. As opposed to the usual Indonesian satay, which we know as skewered chicken, this version uses seafood, and in chef Bayu’s case, he used prawns, served on a thick stem of fresh lemongrass. Lilit, he explained, means to twist or coil around.

But what made this dish special was the sambal matah that came with it. Sambal is a kind of Indonesian salsa, and Indonesia has over 300 versions. Bayu’s has garlic, green chili, red chili, kaffir leaves, lemongrass, lime juice, salt and pepper to taste. It gives the dish a totally new character.

From Bali, he shared a dish from East Java, the soto ayam madura, which is like our mami but using glass noodles and various kinds of chili paste, which Bayu made from scratch.

For the main course, he served a West Javanese dish, ayam bakar bumbu rujak, which is grilled chicken marinated in a yellow paste with French beans and a large prawn on the side. This was Southeast Asian comfort food at its best. Imagine an inasal but marinated with Indonesian spices and pastes. So good.

For dessert, the chef capped it off with something from Java but popular all over Indonesia: kolak pisang, their version of minatamis na saging but with coconut milk. It’s such a simple dish, devoid of spices this time, but the coconut milk instantly transports you to Indonesia.

Unfortunately, the chef is only here until today, Sunday. If you really want to try his cooking, catch him today at Spiral where he takes over the Indonesian station. It will be worth the trip.

Flavors of the world

Apparently, Indonesia is already the second featured country in Spiral’s Flavors of the World campaign. They had already featured Japanese master chef Hiromi Yonekawa for a sashimi cooking lesson. After Indonesia, Flavors will “go to” (i.e., feature) Thai cuisine, so mark your calendars. This will be held during the Songkran festival from April 18-20 featuring Spiral’s Thai master chef Romeo Malate.

Sofitel will then head home to France in time for French month, featuring guest Michelin-starred master chef Daniel Galmiche who will fly in from London (July 7 to 17). From September 11 to 24, they will feature an Indian chef; then hopefully later in the year, they will feature a Latin American chef.

Hidalgo shares that the idea for the “chef’s table” came about since guests kept asking Sofitel’s chefs for cooking tips and recipes. They decided to open the Davao-Boracay showroom to groups who wanted to have customized cooking lessons. “It could also be a new way of entertaining or for team building,” Hidalgo suggests.

Or if you would just like to eat, the showroom can be used for private dinners, too, where you and your guests can watch the chef cook while you chitchat on what’s happening with Martin Andanar and Mocha Uson or other flavors of the month.

At least in our experience, the meal was so good I didn’t even insist on passing by the cheese room on the way out. It was that good!