Women in PH eager to start a business 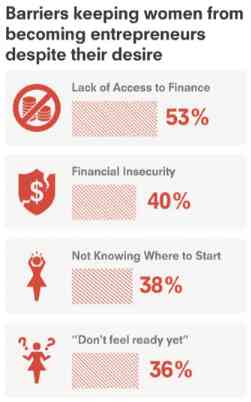 Who run the (business) world?

Girls, as a matter of fact, according to a recent Facebook study, if only they are given the right entrepreneurial

opportunities—which could translate to almost four million new jobs in the country.

Launched in time for International Women’s Day on March 8, the study, conducted by Development Economics and YouGov on behalf of Facebook, revealed that almost nine of 10 Filipino women expressed their desire to put up their own businesses.

The study is part of Facebook’s #SheMeansBusiness campaign, which was launched last year with the aim to support, celebrate and empower women entrepreneurs and women-owned businesses.

The study’s most significant finding revealed that supporting just 60 percent of these women would mean generating over 1.3 million businesses, resulting in more jobs and overall economic growth for the country by 2021, the study reported.

The women surveyed (18-24 years old) admitted, however, to still facing many barriers when it comes to reaching their entrepreneurial goals.

Over half said they had poor access to finance (such as loan programs), while 40 percent identified financial insecurity as another major obstacle. Around the same number also said they had difficulty knowing exactly where and how to begin building a business.

Despite these barriers, Facebook’s business landscape paints an optimistic picture: According to its research, 40 percent of Facebook Pages represent women-owned businesses, and that the number of these Pages has grown by over 60 percent year-on-year.

In the Philippines, specifically, the study revealed that the number of women-owned small-medium business Pages on Facebook has increased over eight times in the last five years; last year alone, the increase was at 121 percent.

“Small businesses make up 99 percent of businesses in the Philippines and contribute close to 32 percent to the country’s GDP,” said Clair Deevy, Facebook head of economic growth initiatives for Asia-Pacific. “Research shows that encouraging women entrepreneurship, and harnessing the potential of Filipino women entrepreneurs by providing them with the right support, contributes to significant economic growth and a more representative business community.”

According to the women surveyed, the support they need to get their businesses up and running include: the right digital tools and support; financial support and advice; network or community support; and practical support such as business and digital skills workshops.

Through the #SheMeansBusiness campaign, the company partners with organizations to provide women better access to the advice, knowledge and tools.

“At Facebook, we are committed to creating an environment that fosters entrepreneurship among women. We continuously work with industry leaders and experts to leverage on the untapped opportunity for millions of women while we welcome a new era in women’s entrepreneurship in Asia,” Deevy said.