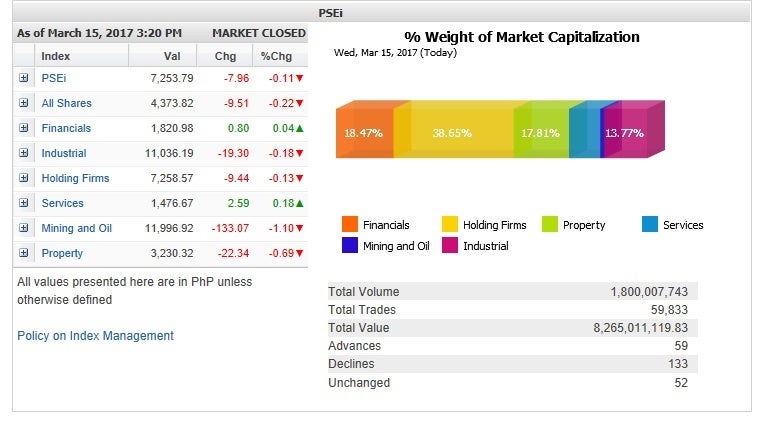 The local stock barometer ended slightly lower yesterday as investors braced themselves for a likely interest rate hike by the US Federal Reserve.

“The local market sold modestly ahead of the FOMC (Federal Open Market Committee) outcome as they waited for the final release of the Fed’s decision. Most analysts expect the FOMC to raise the target range for the funds rate by 25 basis points at the March meeting,” said Luis Gerardo Limlingan, managing director at Regina Capital Development.

Higher interest rates in the United States are likewise seen putting interest rates elsewhere in the world to rise, in turn curbing investors’ risk appetite over the near term.

At the local market, the mining/oil counter was the most battered sub-index for the day, declining by 1.1 percent against the backdrop of a challenging regulatory environment in the Philippines.

Value turnover for the day amounted to P8.26 billion. There were 133 decliners what overwhelmed 59 advancers while 52 stocks were unchanged.

The PSEi was dragged the most by Metrobank and AGI, which both fell by over 1 percent while MPI, SMIC, SM Prime, ALI, BDO and GT Capital also declined.

Outside of the PSEi, notable decliners included Cemex (-6.32 percent) and LMG Chemicals
(-41.94 percent) which both tumbled in heavy volume.

On the other hand, ICTSI continued gain, rising by 2.9 percent while Petron also rose by 1.15 percent following the release of strong 2016 results.

In the meantime, Limlingan noted that US stocks had likewise retreated on Tuesday as energy shares were sold off on the back of weak crude oil prices. He noted that monthly data from the Organization of the Petroleum Exporting Countries (Opec) had shown growth in US crude production while Saudi Arabia told Opec that its output increased in February.