PSEi inches up ahead of US Fed meet 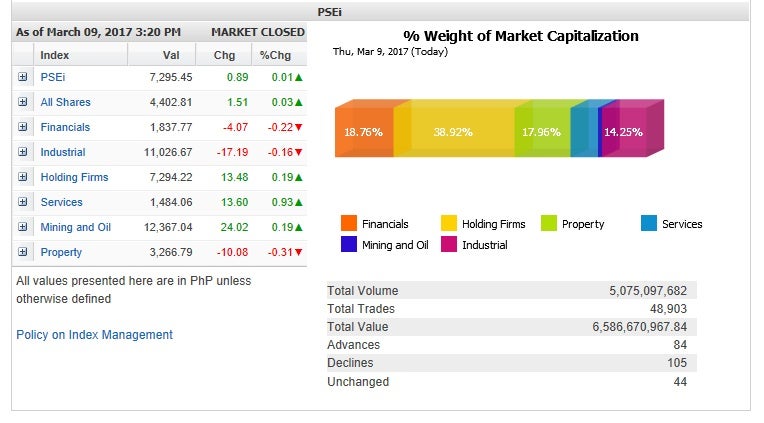 The Philippine stock barometer crawled higher for the second trading session Thursday ahead of the upcoming US jobs data release and next week’s US Federal Reserve meeting.

The main-share Philippine Stock Exchange index added 0.89 points or 0.01 percent to close at 7,295.45 on selective buying of large-cap stocks.  Elsewhere in the region, most stock markets also traded with caution.

“Philippine markets once again traded flat to slightly up as the market waited for additional cues ahead of the FOMC (Federal Open Market Committee) meeting happening next week in the US. This happened despite the S&P 500 and the Dow falling for a third session Wednesday as oil prices settled at a three-month low, dragging on energy stocks,” said Luis Gerado Limlingan, managing director at Regina Capital Development.

The US Fed is widely expected to raise its interest rates anew during its meeting next week. But ahead of the meeting, several key economic data are coming out of the US.

At the local market, the main index was shored up by the holding firm, services and mining/oil counters.  On the other hand, the financial, industrial and property counters dipped.

Value turnover for the day hit P6.59 billion.  There was a modest net foreign selling of P60 million for the day.

Despite the PSEi’s meager gain, market breadth was negative as 105 decliners outnumbered 84 advancers while 44 stocks were unchanged.

First Gen led the PSEi higher with its 2.27-percent gain. PLDT and Jollibee also aided the PSEi, gaining over 1 percent.

Outside of the main index, notable gainer was Puregold, which rose by 3.21 percent ahead of its debut on the PSEi on Monday.

Other notable gainers among second-liner stocks were Bloomberry (+3.77 percent) and Shakey’s Pizza (+5.2 percent).