All mines to grieve 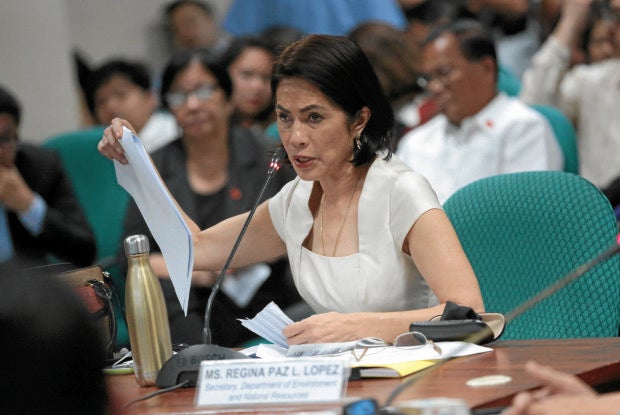 Environment and Natural Resources Secretary Regina Lopez gestures while explaining her position on open pit mining during the Commission on Appointments hearing at the Senate on Wednesday, March 8, 2017. INQUIRER PHOTO / GRIG C. MONTEGRANDE

The DENR boss, Sec. Regina Paz Lopez, is known to use some “unusual approaches” in running the department.

Insiders swore for instance that she chose people for key positions based on their zodiac signs.

What do you think—executives and public stockholders of those 98 grieving mining companies, which she already closed down, must be cursing the heavens for their wrong birth signs?

Even those obscenely rich taipans at times relied on intangible techniques to invite luck into their ventures. Think feng shui, ladies and gentlemen!

But if the incredible Gina Lopez applied some mystical styles of management, the Commission on Appointments (CA) could not be bothered.

According to Rep. Ronaldo Zamora of San Juan City, head of the House contingent in the CA, his colleagues would still zero in on her “qualifications.”

How were her technical expertise and management skills as DENR head? After all, the department must scrutinize every major investment in this country, if only for the ECC, or environmental clearance certificate.

Earlier, Gina Lopez sought to pay the congressmen in the CA a “courtesy call,” apparently to help smoothen her confirmation. They canceled it, angered by reports on a P50-million bribe to each congressman to oppose her confirmation, all attributed to her.

When the “courtesy call” finally pushed through, Gina Lopez still could only be her awesome self, telling the congressmen that, when she talked about the huge bribe, she did not even know that there were newsmen in the audience.

The congressmen took her explanation to mean she stood by her bribery claim, and it was just that she did not want media to report it.

On the curious case of Gina Lopez, the CA still had to postpone the session last week. Was it because of the rallies at the Senate to support or oppose her confirmation? Zamora said it had nothing to do with the popularity or the notoriety of Gina Lopez.

It would all boil down to her qualification.

But Finance Secretary Carlos Dominguez III took a swipe at Gina Lopez, noting that as head of the DENR, she should be a Cabinet member and not a crusader—aka “eco warrior.”

She never bothered to furnish the mining companies copies of the infamous audit report, which she supposedly used as basis for her closure orders.

Talk also had it that top executives of mining firms, in particular Philex Mining chair Manuel V. Pangilinan, foresaw the industry could never expect fairness from the likes of Gina Lopez. Even right from the moment the motorbiking Duterte Harley shocked the industry by appointing her DENR secretary!

During the turnover at the DENR in July, her first public appearance as DENR head, she had revealed her disgust over mining: “The poorest areas in the Philippines were mining areas.”

When she announced she would “accept the offer” of Duterte Harley for her to lead the DENR, she stated: “Mining has a pathetic track record. Pathetic! Wherever there’s mining, the people are poor. So why are we doing it? It’s crazy.”

No wonder, she appointed known antimining activists to the DENR audit team that produced the controversial yet top secret report.

Thus mining companies already expected the audit to be bad news to the industry, and they were right. Only 12 mining firms passed the audit.

Still, the industry had no inkling of the Gina Lopez brand of reasoning. In her own words, while the audit validated her own findings on the violations of the companies, she disagreed with its recommendation to impose fines on them. She wanted immediate closure!

And she would not even require them to repair the damage?

To her the audit was only “recommendatory.” And so why would she show to the public some mere recommendations?

At the same time, she claimed she made her decision with “absolute transparency.”

Never mind that her transparent decision would impoverish hundreds of thousands of people dependent on the mining industry.

Perhaps they were born under the wrong zodiac sign, who knew?