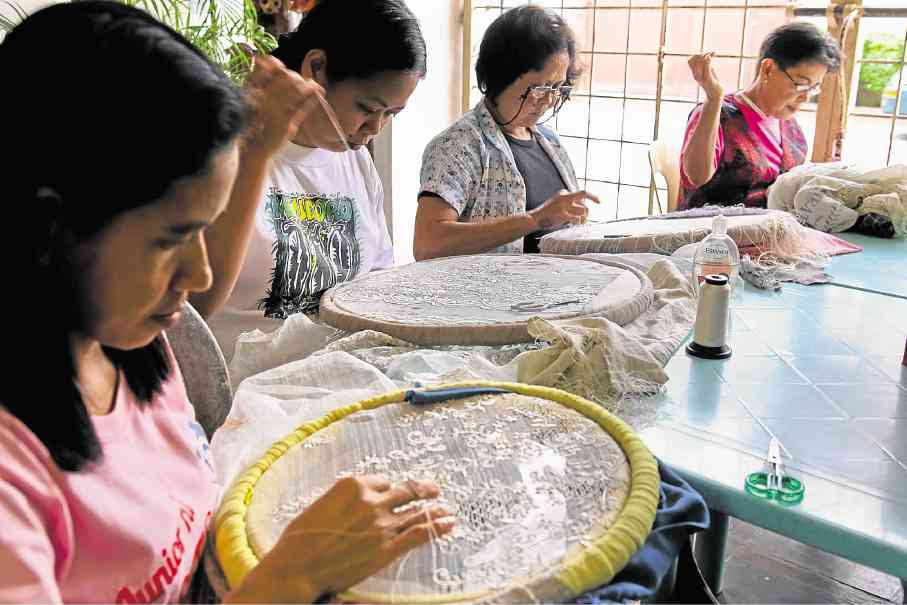 Burderos work at a local embroidery shop in Lumban, Laguna.

Lumban, Laguna— Needles and threads have provided the livelihood of generations of families in this quaint town by the Pagsanjan River in Laguna.

Women, men and children know how to embroider, and their art pieces showcase Lumban’s distinct designs that date as far as back as the 1600s during the Spanish colonial period, said Romel Estrella, the town’s community affairs officer.

She said her craft helped her raise her seven children and send them to school.

“I will grow weak if I do not work. I get anxious if I’m not working on something,” said De Ramos as she showed off her intricate embroidery pieces. “Even at night, if I get bored, I get my things and I embroider.”

De Ramos has been embroidering since she was 7, a skill she learned on her own while watching her mother and sisters sew.

“When they take a break, I undo and then redo their needlework,” said De Ramos.

Lumban’s embroidery designs stand out because these are embossed, said Ronaldo Aben, 52, head of the Lumban Embroidery Association and MultiPurpose Cooperative (LEAMPC).

Scallops in the designs are defined, and the backside of the finished pieces are neat and clean.

Another distinctive feature is the “calado,” which is made by unraveling the cloth’s threads to form a net-like pattern.

“This is difficult to do that is why it is expensive,” De Ramos said.
The most common materials used are piña, piña cocoon and jusi. Piña is the most expensive while jusi is the cheapest, Estrella said.

An embroidered Barong Tagalog made for a wedding costs at least P5,000, far below the P10,000 price tag in Metro Manila stores.

The artisans also make fans, coin purses, bags, shawls, handkerchiefs, tablecloths, table runners, placemats, coasters and just about anything on which embroidery can be done. 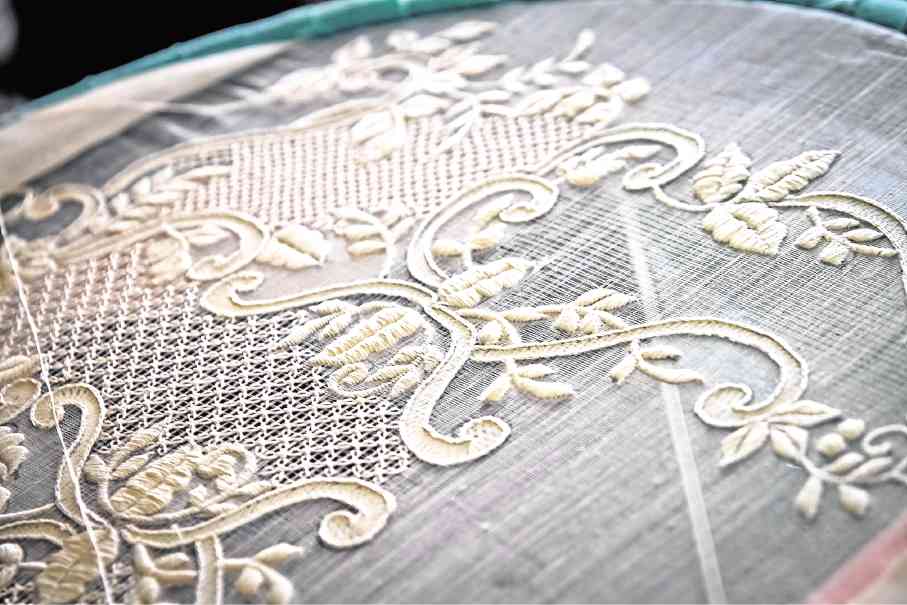 Ornate embroidery, including the calado, displayed at the House of LEA in Lumban, Laguna. —KIMMY BARAOIDAN

Centuries ago, Lumban served as one of the first trading posts of Chinese merchants due to its accessibility from the Manila Bay via the Pasig River and Laguna de Bay.

Franciscan nuns introduced needlework to the wives of fishermen and farmers in the early 1600s, Estrella said.

Sewing was meant to keep them busy during their spare time.

The sisters arrived after missionaries from their congregation put up a regional school in Lumban in 1606 to teach boys to sing liturgical hymns and play musical instruments. Though the school had long been gone, the skills of the first embroiderers have survived, passed on from one generation to the next.

Estrella said the home-based industry reached its peak during the 1970s when the embroidered Barong Tagalog became the prescribed outfit of government officials attending formal functions during the administration of President Ferdinand Marcos.

While almost every member of the household, including children, knows how to do embroidery, Aben lamented the waning interest among the youth in learning the craft.

They prefer other activities or livelihood, he said.

“Most of the embroiderers are getting old or have already died. So it’s very difficult for us to transfer [skills] to the new generation. They are more involved in new technology, gadgets and computers,” Aben said.

Fortunately, there are still some areas in town where children are embroidering, Estrella said.

The emergence of new jobs, like those offered in call centers that pay relatively higher salaries, may have also contributed to the waning interest in embroidery. 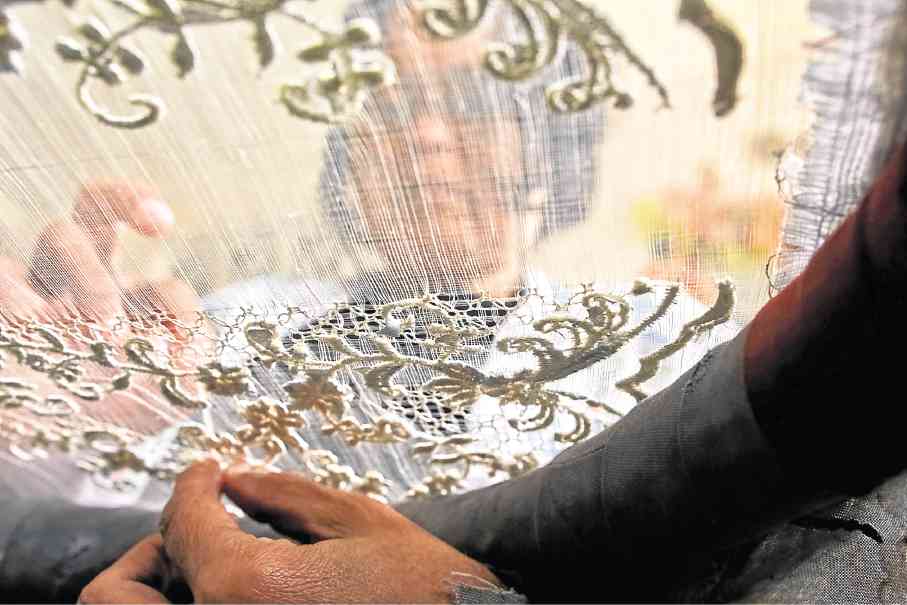 A burdero uses both hands to work on the intricate embroidery designs.

Local education officials are thus stepping in to save the industry.

Plans are afoot to include the Lumban style of embroidery in the public school curriculum, said Mel Anthony Liboon, senior high school coordinator of the Department of Education’s Lumban district schools.

“For now, the plan is to teach it in either elementary or high school so it will not die as we are being invaded by [sewing] machines,” Liboon said.

The municipality has no intention of abandoning the industry.

“Whatever we can provide, like a building where they can display their products, we gave them,” said Estrella, referring to the House of LEA, a building that serves as a showroom for products made by members of LEAMPC.

Estrella was also one of those who established an embroidery museum here. But when the local administration changed, the museum was shuttered.

The good news is that incumbent officials plan to revive the museum to preserve the craft’s history and, more importantly, pass on the skills to the next generation to keep the industry alive.

Though it may now be difficult for embroidery to attract the young, the craft has managed to thrive.

Ailyn del Moral, owner of an embroidery shop, said the internet had helped expand her customer base. She uploads photos of her products on social media sites, enabling customers from around the country and abroad to easily browse them, select a product, remit payment and have them shipped.

“Plenty of orders come in,” Del Moral said. “As you can see, people still seek our embroidery pieces.”

Embroidery shops have inevitably sprouted outside Lumban, but some customers and designers still source their products and materials from the town, Estrella said. 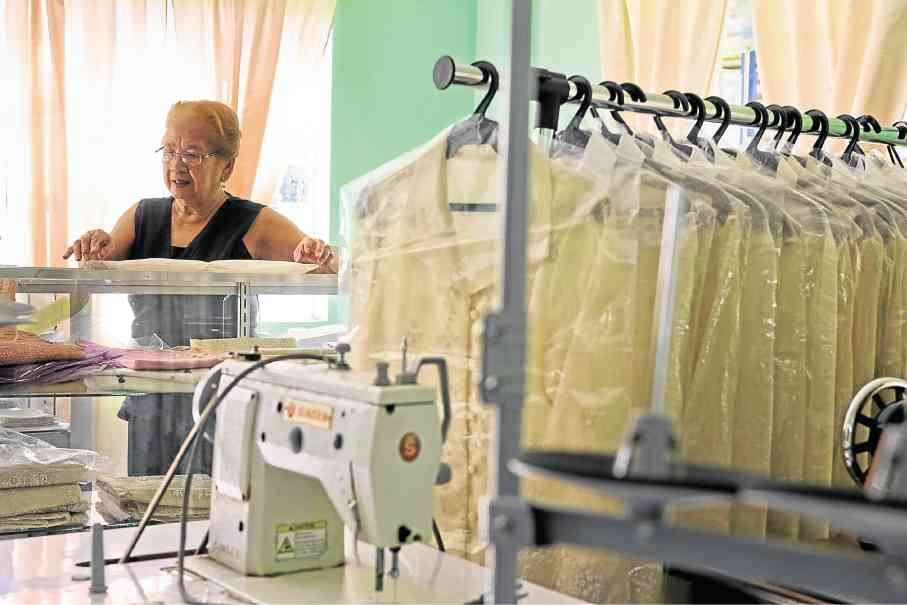 Also, Lumban embroidery has remained relevant and sought-after due to constant innovation.

The traditional design has been enhanced by ethnic patterns, colors, sequins or crystals to give them a fresh look.

“If you are in this type of business, you need to innovate … . You lways have to have new designs and new ways to do them,” Aben said.

De Ramos has helped several embroiderers here, including her children and grandchildren, perfect the craft. Aben is also intent on transferring his skills to the younger generation.

“I want to share all that I know with the new generation because I am already 52. While they are still young, they have to practice well because there will surely emerge among them someone who will be better than me,” Aben said.