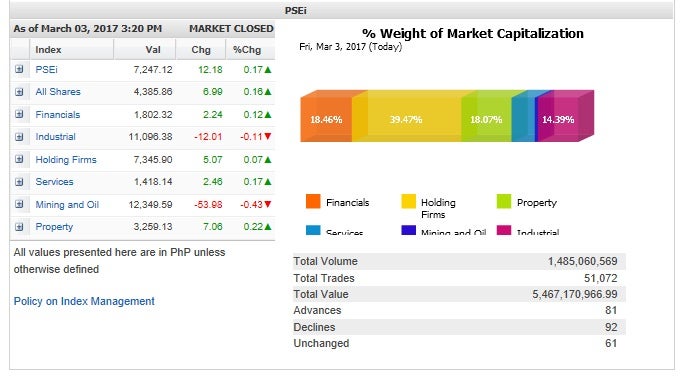 Bucking a regional downturn, the local stock barometer firmed up for the second session in a row on Friday on the back of local investors’ selective buying of large-cap stocks.

Elsewhere in the region, trading was sluggish as investors awaited cues on the next US interest rate hike, which some expect to happen as early as this month. US Federal Reserve chair Janet Yellen is set to deliver an economic outlook address in Chicago while her deputy Stanley Fischer will speak in New York.

On Friday, the PSEi was led higher by the financial, holding firm, services and property counters.

On the other hand, the industrial and mining/oil counters remained sluggish.

Value turnover for the day amounted to P5.47 billion.  Foreign investors were net sellers to the tune of P340 million, but upbeat domestic investors helped shore up the main index.

Despite the PSEi’s slight gain, market breadth was negative. There were 92 decliners that edged out 81 advancers; while 61 stocks were unchanged.

The PSEi was led higher by conglomerates Ayala Corp. and LTG, which both gained over 2 percent.

LTG has been benefiting from the government’s crackdown on the alleged fraudulent activities of a rival cigarette manufacturer.

Investors also picked up shares of SM Prime and PLDT, which both gained over 1 percent.

BDO, Metrobank and BPI also helped prop up the index.

Outside the PSEi, investors continued to dump shares of cement maker Cemex, which tumbled by 3.94 percent.