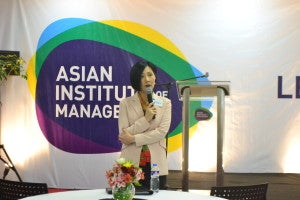 Asian Institute of Management (AIM), which is celebrating its 50th anniversary next year, is redeveloping its Makati campus for an estimated cost of as much as P2.5 billion alongside a rebranding program to signify its ability to cope with the fast-evolving economic and business landscape.

In a press briefing on Friday, AIM president and dean Jikyeong Kang unveiled a new logo that represents the dynamism of the school and the Asian region.

“This is to give the public the message that AIM is changing just like how Asia is changing, just like how businesses are changing. This is our way of bringing attention to AIM where lots of exciting things are happening,” Kang said.

She said the new logo stayed true to AIM’s heritage by keeping the colors – royal purple, blue, green and yellow – and the meaning was consistent in terms of dynamism, quality, sustainability, care and concern for others. “But in terms of look and feel of it, it’s very modern. That’s the message we’re trying to give out,” she said.

A group of business leaders, along with prominent educators and the Harvard Business School, founded AIM in 1968.

“Today, through this new identity, AIM is reinforcing our commitment to contribute to the meaningful growth of Asian enterprise and societies by developing professional, entrepreneurial and socially responsible leaders and managers. We are looking forward to shaping more future leaders and change-makers in the coming years,” Kang said.

“As you know, AIM is at the juncture of really starting a new era and the new branding is part of the new direction. You will see more changes and a transformation will be clearer and clearer moving forward,” AIM chair Napoleon Nazareno said.

On the “campus revitalization” program, Kang estimated that this would cost anywhere from as low as P1 billion to as much as P2.5 billion. The project can be completed in as early as two years and in a way that won’t disrupt existing classes and operations, she said.

“It will involve major cosmetic work to the existing buildings. It will involve new building or buildings but, once completed, it will have a new look and feel. This is to support all the changes and initiatives we will bring about to the AIM,” she added. Any new building to rise on the campus will be a “green” building, she said.

Apart from the introduction of a new logo and a “campus revitalization” program, Kang also talked about initiatives to upgrade AIM’s faculty and curriculum. Up for board approval are two new graduate programs: Masters of Science in Data Science and Masters in Disaster, Risk and Crisis Management.

The new program on Data Science, Kang said, aimed to train “true” data scientists, noting how big data – referring to voluminous amounts of data that organizations can potentially mine for decision-making, problem-solving and other analytical insights – had become a big deal these days.

“It’s not just something that you teach in Engineering or Computer Science programs as it needs new perspectives,” she said.

Running a Masters Program in Data Science will mean constantly changing curriculum based on the experience of American schools that introduced such programs, Kang said. Being “nimble, agile and dynamic,” she said AIM was well-positioned to offer such.

On the proposed Masters in Disaster, Risk and Crisis Management, Kang said: “Our focus will not only be to teach people how to deal when the disaster strikes but also to prepare organizations, units within the civil society or government, industries to prepare themselves better for disaster and to think about how to minimize the disruption that will be brought in by disasters and how to manage them when it happens.”

On MBA programs, Kang said based on the US experience, the American MBA market was steady at best and in some places declining, with many industry experts predicting that half of the current business schools may disappear while some may merge and some may take a different form.

“Luckily in Asia, we don’t experience that trend,” adding that AIM would continue to work so that its graduates would be able to “differentiate” themselves from others in the marketplace.

While there are so many good business schools in the region, she added that AIM had a different mission as it inculcates in its graduates the call to do well for society and to be conscious of the “triple-bottomline” or look out now just for the financial but also the social and environmental impact of the businesses they run.