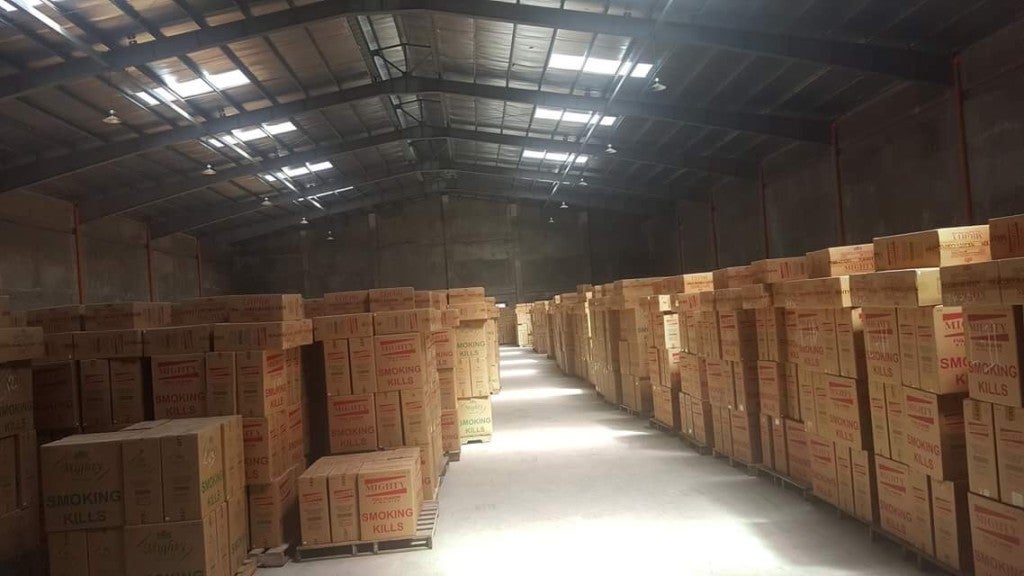 In a press conference Thursday, Bureau of Customs officials confirmed that all of the Mighty cigarette packs confiscated in General Santos City and Pampanga on Wednesday bore fake tax stamps as verified by the Bureau of Internal Revenue. The agency is also looking into the possibility that the products may have been manufactured by Mighty using smuggled raw materials.

Based on reports, the joint BOC and BIR teams seized 11,000 master cases of Mighty cigarettes valued at P215 million in General Santos City, on top of the 62,000 master cases worth P1.957 billion seized in San Simon, Pampanga.

In all, the 73,244 master cases contained 36.622 million packs which, at an excise tax of P30 a pack, will translate to P1.098 billion in foregone revenue for the government.

“The raids were based on intelligence reports. This is part of the BOC’s efforts in line President Duterte’s directive to track and trace illicit trade,” Layug said.

BOC lawyer Mandy Anderson said the five 3,000-square-meter warehouses inside San Simon Industrial Park, which contained Mighty products, were found to be sub-leased to the cigarette manufacturer, hence “we can presume they [Mighty] have knowledge of this.”

“We have no proof that the owner of the warehouses had knowledge” that these contained cigarettes bearing fake tax stamps, she said.

As such, Anderson said, Mighty might be liable for tax evasion which could be filed by the BIR, which has the authority to file such a criminal case. If found guilty, people involved may be imprisoned for a minimum of six years, she said.

Neil Estrella, customs intelligence and investigation service director, said the confiscated items would still be subject to further investigation and the BOC would also verify if the raw materials were smuggled.

The BOC will also validate the names and personalities involved in the warehouses where the products had been stored, he said.

“We will provide due process to the other party while doing further investigation,” Estrella said, referring to Mighty. He said the BOC was not singling out any company in its investigation on the proliferation of fake tax stamps.

In a statement, Mighty said it was willing to cooperate with the BOC in its investigation. It alleged, however, that such was a “demolition job” being undertaken by its competitors.

“Mighty is willing to open all its warehouses to cooperate with the BOC for seizure of fake cigarettes should any be found within its premises. It reiterates its long-standing position that it is not in the business of producing fake cigarette products as its own local brands are well-accepted by its customers,” Mighty executive vice president and spokesperson Oscar Barrientos said.

“The company, however, bewails the use by other government agencies of mission orders of the BOC to pursue schemes of its competitors to seize its products using a false pretext that fake cigarettes are stored in its warehouses because of its being in the forefront of efforts to alleviate the plight of local tobacco farmers through amendatory legislation,” Barrientos said.

“It was plainly from the result of raids conducted [last Wednesday] by the BOC in warehouses of Mighty in Pampanga and General Santos that no fake products of its competitors were found. That should have aborted the activity. But other government regulators without appropriate mission orders or directives from its head offices had used the raid to assert offenses by Mighty not covered by the BOC orders,” Barrientos claimed.

As such, Barrientos called on the BOC to be “vigilant at its function to avert smuggling and ensure collection of duties and taxes as [Mighty] does not produce fake products and had done nothing to violate any of its regulations or of the Tariff and Customs Code.”