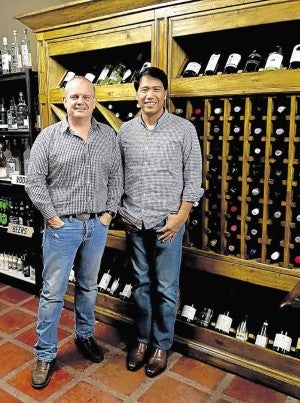 You really never know where destiny might take you.

Jojo Vega had been very successful in the sales and marketing of various companies, most notably San Miguel and Globe. He met his partners Robert Ferguson and Piers Kinloch, Scotsmen who moved to Australia, at a telco conference. Ferguson and Kinloch then found themselves in Manila so often, at least three times a year, that they thought, “why not make our visits really worthwhile?”

So Don Revy was born, a company that imports and distributes liquor, wine and artisan beer.

The three were always out drinking, Jojo explains, so they came up with a name that rhymes with “always on the bevy,” which is Scottish slang for “always drinking” and—I surmise in drunken stupor—created the don who is always on the bevy, Don Revy.

But they are completely sober and serious about building the brand.

“The mother company of Don Revy Philippines is Don Revy Australia, so we are an international company,” Vega shares. “While we are starting in the Philippines, the vision is to expand to Cambodia, Laos and Vietnam, then the rest of Southeast Asia.”

With Vega’s background in the sales and marketing of San Miguel, it seems that vision will soon become reality.

Launched only late last year with 17 stock keeping units (SKUs), the company now has 180 SKUs supplying wines, beer, whiskies, gin, tequila and rum to all major 5-star hotels, including Makati Shangri-La, Fairmont, Diamond, Peninsula and New World; and restaurants that care about their wines and whiskies such as Blackbird, Sala, Melos and Cav.

For those who want to buy bottles, stocks are available in all major grocery stores such as Rustans, Landmark, even 7-11.

“French, Spanish, Italian, even Chilean wines are all already very well-known,” Jojo shares, “but not a lot of people know about New Zealand wines. Yet their climate is perfect for making wines as well. So we want people to also learn about and appreciate New Zealand wines.”

Today, Pebble Lane, one of the wines Don Revy imports, is the number one selling Sauvignon Blanc in Rustans.

It’s not just wines that Don Revy specializes in. Two partners being Scottish, it would be a travesty if the company did not distribute whisky as well.

Rob Ferguson, chair and CEO of Don Revy, is a doppelganger of Sean Connery (who was born in Edinburgh, Scotland) … that is, if you close your eyes and just listen to him.

At the Don Revy showroom in Poblacion, Makati (on the second floor of Mulligans, formerly The Savoy, on Kalayaan), Ferguson brings out a map of Scotland to explain the difference between Speyside and Islay (pronounced ay-lah, not ay-ley) whisky.

Inducting the whisky virgin with a 1995 Cameronbridge, he explains that with Speyside malts, you may get a whiff of flowers alongside the smell of toffee and the aroma of vanilla. But what he likes about this bottle is that, while it is not a trophy bottle, it is easy to drink and reliable.

“If you will drink whisky, start with Speyside,” Ferguson explains.

Then you progress to Islay malts, which are from the distilleries along the southeastern coast.

Brands you might be familiar with include the very name-droppables Laphroaig, Lagavulin and Ardbeg. (Crack at the men who try to give themselves an additional two inches by knowing how to pronounce and gloat about their love for Ardbeg and in the same breath praise a Talisker. Ardbeg your pardon, puhleease!)

Ferguson had us try a 1988 Bunnahabhain to segue to Islay malts, as it is not so heavily peated but has a nice, long finish on the palate.

Then, to compare, he shared a 1972 Invergordon. Experiencing the elegance of an aged whisky compared to a younger one is almost spiritual.

You notice how the flavor goes to the back of your mouth then warms you without being harsh. “The longer it is aged, the more refined,” Ferguson explains.

While the company made the executive decision to avoid labels that are already prevalent in the market, they have managed to still present a range that runs the gamut from A for alcohol to Z for zombie the morning after, undiscriminating on price points but considerate in taste.

It seems the three mates are set to conquer the world one bottle at a time. It’s pretty impressive for telco dudes who were just “on the bevy.”