By the middle of next year, the province of Cebu will have another iconic structure that will pay homage to the rich culture and island heritage of the province.

The Terminal 2 of the Mactan-Cebu International Airport, touted as the world’s first resort airport, is poised to become a lifestyle destination in itself, offering tourists their first taste of Cebu as soon as they set foot at the country’s second-busiest air gateway.

“We create the first and last impressions visitors make of Cebu and the rest of the country and thus we want to create a worthy impression for everyone. Not only will the new terminal look distinctly Filipino, it will also be a complete experience of Filipino hospitality the moment you set foot here,” GMR-Megawide Cebu Airport Corp., (GMCAC) president Louie Ferrer said.

“This airport is more than a transfer point, we are making it a vital part of the Cebu experience,” Ferrer added.

GMCAC is the consortium managing the terminal operations and other related areas of the Mactan-Cebu Airport under a public-private partnership with the Mactan-Cebu International Airport Authority. It bagged the P14.4 billion contract for the MCIA passenger terminal building in 2014.

The wave-shaped, barrel-roofed structure of the new 65,000 sqm building (Terminal 2) will be created from arched beams made of glulam wood.

So what will make this airport unique and unparalleled?

For one, GMCAC tapped a powerhouse cast for Terminal 2—design icon Budji Layug, Arch. Royal Pineda, and Cebu-based and world renowned designer Kenneth Cobonpue. Filipino artistry and craftsmanship will thus be showcased in this particular project.

Apart also from expectations that this will be the world’s first resort airport, Terminal 2 will be made of glulam wood, reportedly a first in Asia.

Jelly M. Suaco, GMCAC head of corporate affairs and branding, said the main structure was made using this kind of wood instead of steel, which is traditionally used in many of the modern airports in the region.

The use of wood dovetails with the goal of creating a resort-themed airport.

“We went through a couple of designs but there were very specific parameters in creating that new terminal and one of them was that it has to be reflective of Cebu culture… We wanted to take the airport in a different direction which is why we have a resort themed airport,” Suaco said in a recent interview at the Mactan Airport in Cebu.

An earlier statement by Rubner Holzbau, a engineered timber construction firm in Europe, reported that “the wave-shaped, barrel-roofed structure of the new 65,000 sqm building will be created from arched beams made of glulam wood.”

According to the statement, a total of 4,500 m³ of glulam timber would be used and installed under the supervision of Rubner Holzbau.

“This project is the largest order that has ever been received for a structure made of glulamen in the entire company history of Rubner Holzbau in Ober-Grafendorf. At once there is also no other airport building anywhere in Asia that is constructed entirely from glulam,” the statement earlier reported.

Suaco added that once completed, Terminal 2 will also have a commercial center and a hotel to mirror that distinct resort lifestyle Cebu is known for.

Solar panels will likewise be installed and will generate electricity to sustain the terminal operations for at least a couple of hours, she said.

Once completed, MCIA Terminal 2 will also have a commercial center and a hotel.

This growth may be attributed to the new routes being opened. The Mactan-Cebu Airport is currently serving a total of 16 international destinations, 27 domestic destinations with 19 partner airline carriers.

In the next two years, GMCAC is targeting new routes connecting Cebu to Australia, Europe and other Asean countries, likewise expanding connections to China, Japan and South Korea.

“We need proper infrastructure so that we can accommodate more airlines and more flights. Route development is essential to an airport; the more flights we have, the more passengers will pass through our gates,” Harrison said.

The construction of the MCIA Terminal 2, which is slated to open on June 2018, will increase passenger capacity to 12.5 million from 4.5 million. 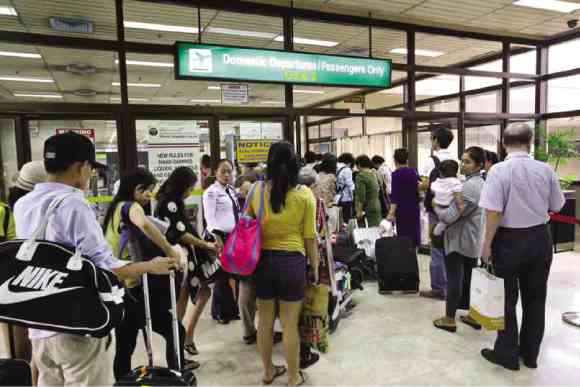