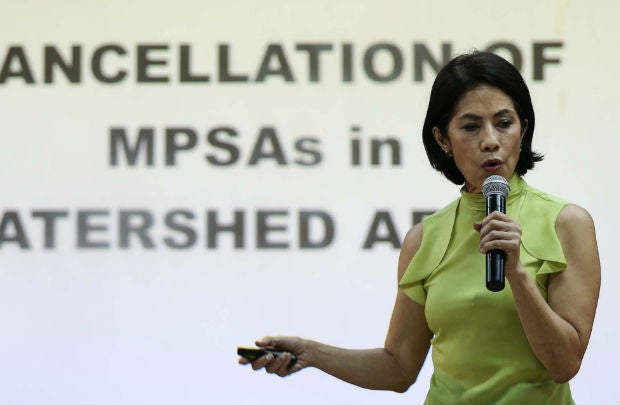 Sec. Gina Lopez with a copy of the DENR Mine Audit Report during a press briefing on Mineral Production Sharing Agreement.
INQUIRER PHOTO/LYN RILLON

Environment Secretary Regina Lopez on Tuesday announced she decided to cancel a total of 75 mineral production sharing agreements (MPSAs) because the projects — all of which have not reached the mine operation stage — were located in watersheds.

The canceled MPSAs include that of the $2-billion Kingking gold and copper project in Davao del Norte, the holder of which is the group of former senator Manny Villar, a major ally of President Duterte.

Also, the scrapped contracts include five MPSAs that involve the Philex group led by Manny V. Pangilinan, who figured in a verbal battle with Lopez when she spoke against mining in an industry forum in 2012.

“Water is life. When (a mining activity) hits a watershed, you kill the people living there,” Lopez said in a press briefing.

“In this country, all open-pit mining operations are being done in a watershed,” she said. “This should never be allowed.”

A fifth MPSA was assigned to Silangan Mindanao Mining Co. Inc. in Surigao del Norte, where Philex hopes to develop a $2-billion copper-gold project that would replace the group’s current biggest revenue stream — Philex Mining Corp.’s Padcal mine in Benguet which is expected to end production life in 2022.

In August 2016, Philex announced that the Silangan project advanced a step closer to development stage as the Mines and Geosciences Bureau (MBG) of the in Surigao del Norte as the regulators green-lighted its amended mining project feasibility study.

Similarly, in the same month, Villar-led St. Augustine Gold and Copper Ltd. (SAGC) — the joint-venture partner of King-king operator Nationwide Development Corp. (Nadecor) — said they remained bullish on securing financing as they were able to renew their MPSA.

“With Kingking now fully permitted, we have considerably strengthened our ability to secure financing and proceed and next phase of King-King’s development, including the completion of a feasibility study,” SAGC president and chief executive Paolo A. Villar said in a statement.

The cancellation of 75 MPSAs is on top of the 23 MPSAs for mines that are already in the operation stage, the closure of which Lopez announced last Feb. 2.

According to the a person involved in the audit of mines, the closure order meant the cancellation of MPSAs.