Manila among Top 30 most dynamic cities Manila was ranked the 19th most dynamic among 134 major cities assessed in the latest study by professional services and investment management firm Jones Lang LaSalle (JLL).

This is quite commendable, considering this was the first time that Manila was included in the Global Top 30 of the City Momentum Index (CMI), since it was first published in 2014.

Based on the fourth edition of the said index, Manila was cited for its “particularly dynamic office market supported by a growing and globally competitive business process outsourcing (BPO) sector.”

Manila was likewise identified by JLL as one of the “Emerging Megacities” along with Delhi, Mumbai, and Chennai, which are said to be leveraging their dynamic labor markets to drive momentum.

“Growth in domestic corporations and foreign direct investments (FDI) into areas such as BPO is helping to fuel among the fastest economic growth out of all the CMI cities. However, this group faces significant infrastructure and quality of life issues, with high levels of inequality, congestion and pollution hindered by weak city governance,” the report stated.

The CMI is JLL’s proprietary index designed to identify the world’s most dynamic cities. It tracked the speed of change of a city’s economy and commercial real estate market, identifying those cities that have the most dynamic attributes over the short and long term.

The index was meant to capture the signals of change that are expected to “underpin future city success.”

In its assessment, JLL used a total of 42 variables to look into a city’s socioeconomic, commercial real estate, and longer term momentum.

JLL was quick to note that the index “does not necessarily hold that the CMI’s leading cities will outperform cities not featured in the top tier, or that they will provide the most immediately attractive real estate investment environments.”

Rather, the cities in the list are those where change is occurring most rapidly and thus, should be monitored closely.

For this year, Bangalore was identified by the CMI 2017 as the most dynamic city, followed by Ho Chi Minh City; Silicon Valley; Shanghai; and Hyderabad.

Also included in the Top 10 were the cities of London; Austin; Hanoi; Boston; and Nairobi.

“Various political upheavals are threatening the global status quo, creating economic uncertainty and testing the resilience of the world’s major cities. These disruptions are happening just as our cities are undergoing major structural change as the effects of globalization, technological breakthroughs and rapid urbanization combine to challenge the very fabric of our urban spaces,” the report stated.

“Yet despite the multiplicity of challenges, the 2017 edition of JLL’s City Momentum Index highlights remarkable dynamism in our major cities, many of which are consistently outperforming their national economies,” it further noted.

Other highlights of the report are as follows:

The Asia Pacific region is shown in the CMI 2017 to be home to more than half of the world’s 30 most dynamic cities and real estate markets, testament to the rise of the region’s cities as major hubs of commerce and innovation. 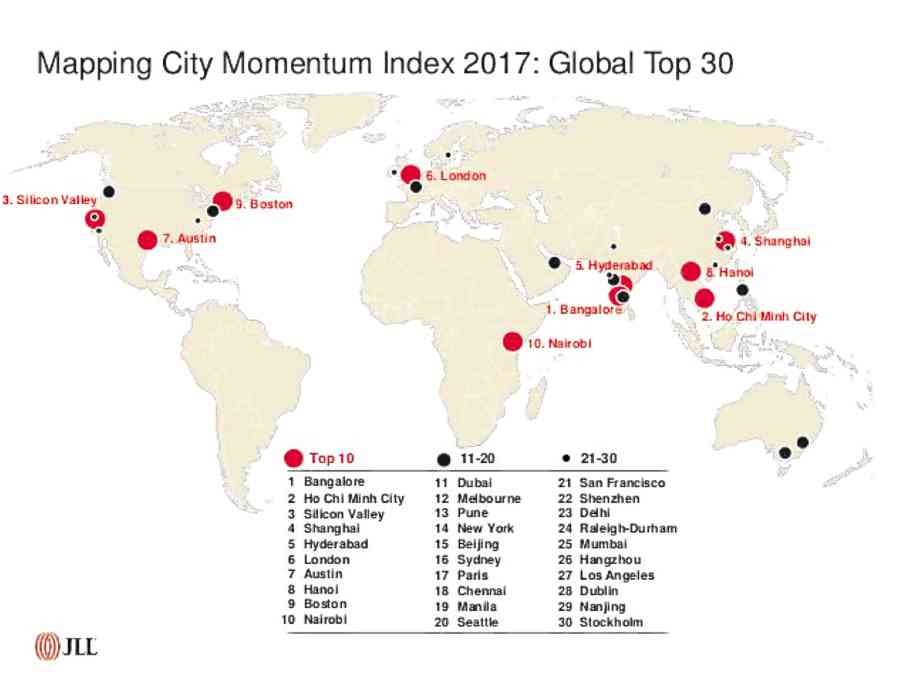 While China no longer dominates the top ranks, it is nonetheless still well represented in the Global Top 30.

Tokyo and Seoul, which were in the Top 20 in the CMI 2016, have fallen out of the top positions, ranking in the mid-30s. While both cities finish in the top 10 on long-term momentum, they have disappointed on short-term economic and real estate momentum in 2016.

Singapore and Hong Kong were not included in this year’s Global Top 30 in terms of momentum. Singapore is experiencing a continuing correction in office and retail rents, and sluggish net absorption, while Hong Kong lacks positive real estate momentum with office rents set to enter negative territory from 2017.

The CMI 2017 also cited five trends to watch for as these were expected to have a significant impact on a city’s dynamism. These are as follows: 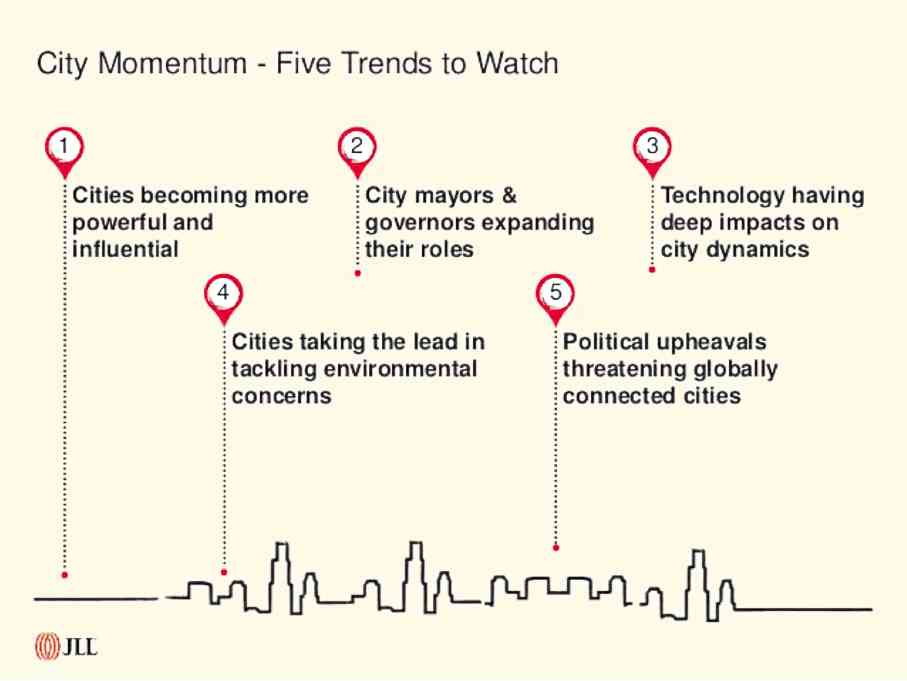 JLL cited five trends to watch for in its fourth edition of the City Momentum Index (CMI). Slide from www.jll.com

“Strong momentum can pose challenges as well as opportunities. Rapid growth can lead to difficult-to-address issues which impact on quality of life and make it difficult to maintain momentum, including widening inequality and affordability issues, strains on infrastructure and local amenities, and environmental degradation,” the report explained.

“In order to retain their competitive edge, cities will need to focus increasingly on liveability, affordability, social and spatial inequalities, environmental quality and community transparency,” it added.