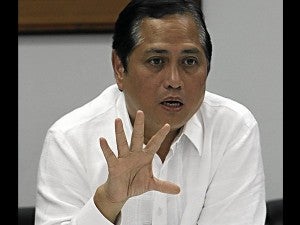 MANILA — After serving as National Treasurer for almost eight years, Roberto B. Tan has confirmed that he will move to head state-run Philippine Deposit Insurance Corp. (PDIC) in February.

After the T-bills auction Tuesday, Tan told reporters he will take his oath as new PDIC president on Friday (Feb. 3). The PDIC’s current president is Cristina Q. Orbeta.

Tan was National Treasurer from 2008 to 2012, but took a break when he held the executive director post in 2012-2015 for the World Bank group that includes the Philippines, Brazil, Colombia, Dominican Republic, Ecuador, Haiti, Panama, Suriname, and Trinidad and Tobago.

He returned to the country to again serve as National Treasurer in 2015 until present.

Tan said De Leon would continue to implement reforms in the Bureau of the Treasury, including the New Registry of Scripless Securities (nRoSS) which he disclosed would go live by June.

The nRoSS would “integrate auction and registry operations and consolidate key information from these systems [to equip] the Treasury with better tools for data mining and analytics to support policymaking,” the Treasury said last November.

The nRoSS is also set to minimize operational risks by replacing legacy systems and conform to industry practices and international standards. Furthermore, the nRoSS adds support for the bureau’s existing and future liability management programs and capital market initiatives,” according to the Treasury.

The current Registry of Scripless Securities (RoSS) is the official registry of absolute ownership, legal or beneficial titles or interest in treasury bills and bonds.

At the Treasury auction, which was postponed last Monday due to a technical glitch, the T-bills offered were only partly awarded amid thin trading ahead of the release of the results of the Federal Open Market Committee meeting on Jan. 31 to Feb. 1.

The Treasury sold all P6 billion in 91-day IOUs offered at an average annual rate of 1.998 percent. Tenders for the three-month T-bills maturing on May 3 reached P8.86 billion.

For the 182-day debt paper, the Treasury accepted only P3.935 billion out of the P5-billion offering at an average rate of 2.252 percent. Bids for the six-month treasury bills maturing on Aug. 2 totaled P5.685 billion.

As for the 364-day government securities, only P1.367 billion were awarded at an annual rate of 2.571 percent, as the auction was undersubscribed. Investors tendered a total of P3.517 billion, short of the P4-billion offering for the one-year T-bills maturing on Jan. 31 next year.

“We were just following market behavior, so we were just supporting the sentiment of the market,” Tan said, noting that “trading was quite thin in treasury bills, particularly on the long end, so we were expecting lower [bid] volume on the 364-day.”  SFM