Investing in the Year of the Fire Rooster 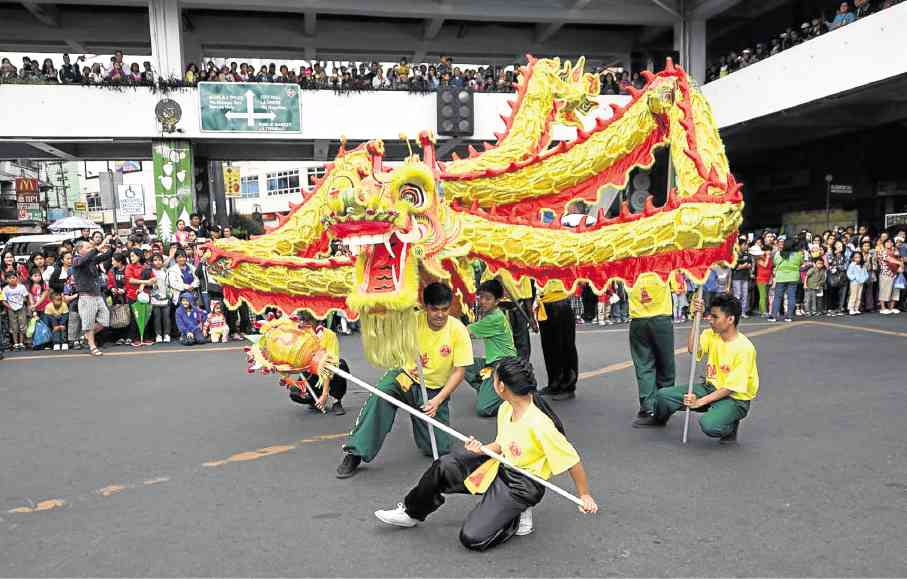 ENTER THE DRAGON A yellow dragon, carried by Baguio youth of Chinese descent, works its way through Baguio’s streets on the eve of the Year of the Fire Rooster, which will be a good one for many. —EV ESPIRITU

The Year of the Mischievous Fire Money brought a lot of surprises that rocked global markets, bringing some windfall only to the contrarians. But will the Fire Rooster be kinder, especially to businessmen and investors?

While analysts see no substitute to fundamental analysis, many of them see no harm in considering clues and omens in the lunar cycle, whether for entertainment or as some sub-genre of technical science.

The 2016 CLSA Feng Shui Index, for instance, last year accurately predicted plenty of monkey mischief and the rise of the Hang Seng from February to March. But by April-May, there were some unexpected bumps. It also accurately saw a drop in the Hang Seng on June 24 and sure enough, the day after the Brexit (the United Kingdom’s exit from the European Union) vote, the Hang Seng slid by 1,000 points.

Now on its 23rd edition, the same CLSA Feng Shui index predicts that the Year of the Fire Rooster, after scratching aimlessly for the first couple of months, the Hong Kong stock barometer meter will claw its way upward and rule the roost around July/August. After a few ups and downs, the stock index is seen losing its grip by November-December but will still manage to end the year on a higher perch.

The Philippine Stock Exchange index (PSEi) won’t necessarily track the performance of the Hang Seng index, but there are general predictions by CLSA Feng Shui masters that are worth looking into.

While fire and metal guide the yearly chart, the CLSA Feng Shui masters say the elements’ influence is not as strong, allowing earth, wood and water to play their roles. Wood starts the year in the ascendency, fire influences from May to July, earth from August to September, metal from October to November and water at year-end.

The CLSA Feng Shui index says this new lunar year promises to be a “healthy, wealthy” year for those born under the Snake and Horse signs, while love is in the air for the Rat and Ox.

Dog, Monkey and Pig zodiacs may enjoy profits but will need to work hard, while Rabbit signs should display caution when driving. Of the 12 zodiacs, Goats will have the toughest year.

“The Grand Rooster tells us that The Donald [Trump], born in a Dog year, is expected to push the bowl even further forward in 2017, while Barack Obama (Ox) needs to work even harder to secure a comfortable retirement,” CLSA said.

“Roosters, be warned, just because it is your year, it doesn’t guarantee you get to strut around carefree. The charts advise all chooks to stop squawking and get down to work this year, only those who have already feathered their nests may lie back and enjoy the grain,” CLSA said.

Note that President Duterte, who was born in 1945, is a Rooster.

“[President] Duterte could have a good year, having been born in the Year of the Rooster. But he should be careful in March, the month of the Rabbit (an enemy of the Rooster),” said Mark de Mesa, technical analyst at Maybank ATR Kim Eng Securities in a recent briefing to investors, citing key takeaways from history and Feng Shui experts that could be relevant to equities investing.

Tracking patterns in history, De Mesa said world leaders should be cautious this year. The last time the Fire Rooster was here in 1957, there were good things like technological advancements. However, there was likewise a series of unfortunate events like then US President Dwight Eisenhower suffering a stroke and then UK Prime Minister Anthony Eden quitting his post after what was widely deemed as a serious tactical mistake in colluding with France and Israel to use military force against Egypt.

It was also the year when the Philippines’ very own popular President Ramon Magsaysay died in a plane crash.

De Mesa said there was also something about the number 7 that should make investors cautious: The stock market crash—also known as the Black Monday that saw the largest single-day market crash in history, with the Dow Jones Industrial Index sliding by 22.6 percent—happened on Oct. 19, 1987.

Closer to home, the Asian financial crisis that resulted in massive currency devaluations and a string of corporate defaults that shook up banking systems erupted in 1997.

Also, the Great Recession that resulted in a global liquidity crunch and the eventual collapse of big Wall Street institutions like AIG, Bear Stearns and Lehman Brothers started in 2007.

“In 2017, I just hope Trump will do his best to make America great again,” De Mesa said. “But what I find positive for Trump is, during his inauguration speech, he recognized Bill and Hillary Clinton and even asked the crowd to stand up for a standing ovation. He said that they would work together to keep peace and prosperity.”

If the US would be able to boost its economy and if the Philippines maintained good relations, he said the local market could benefit as well.

De Mesa said it may also be worthwhile for investors to keep in mind the lucky businesses this year: Food/restaurants, LPG, gas station, electronics and technology.

“This is an auspicious year for metals—automobiles, mining, safety and security industry sectors; and for water—those in banking, finance, travel and logistics; and wood—clothing, shoes and farming,” said First Metro Investments Corp. president Rabboni Francis Arjonillo.

Lucky office and market locations are those in the east and the north, he said.

Keeping in mind correlations with regional markets, it also bears assessing what the CLSA Feng Shui index sees for the Hong Kong market.

In terms of sectors, CLSA feng shui masters expect scraps from both gaming and transport from May through July, with the tables turning by November to December. Oil, gas, utilities, tech and telcos will shine mid-year, but produce scant pickings by the second half, it said.

“The spring chicken is true to its name in terms of healthcare/pharmaceuticals, which is the Rooster’s top sector pick in April, while renewables strut their stuff in August. In general, our Rooster predicts fiery returns for gaming, transport and renewables for the overall year, cautioning not to put all your eggs in one basket unless you want scrambled results,” CLSA said.

So far this year, the gaming theme has emerged as an early favorite in the Philippine stock market, with tourism prospects boosted by Mr. Duterte’s vow to accelerate infrastructure spending and the rekindling of bilateral ties with China.

“Fire Rooster combined the pride and diligence of the rooster and the glow and sparkle of fire. Thus, it could lead to breathless and impatient atmosphere and mood and the desire to get it all done now,” Arjonillo said. “So this year, we will do well by staying focused and centered, with an eye to the goal we want to achieve.”

“We expect this year of profound changes and it requires equally profound patience, timing and knowing your direction is key to achieving success this year, with the lucky color gold and earthly colors of brown and green. It’s now essentially time to market your entry well into the market and the payoff will be handsome.”