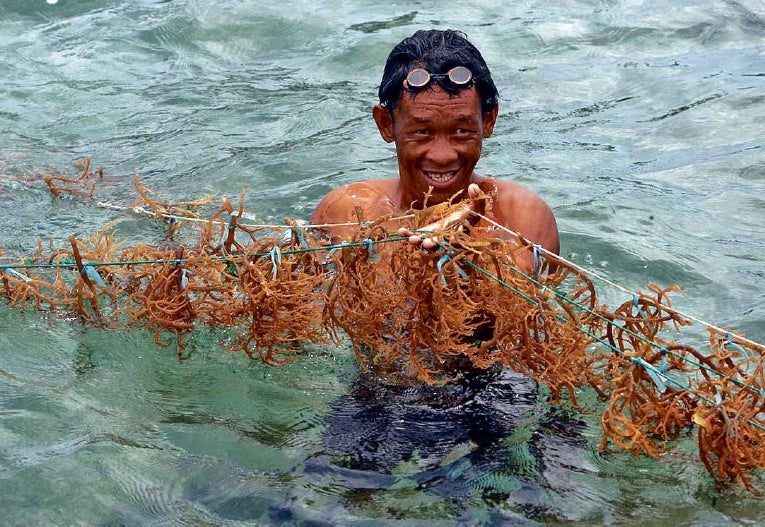 A man shows his seaweed farm located at the Sulu Sea, town of Sibutu in the province of Tawi Tawi. Tawi Tawi is a major producer of seaweeds in the country. –REM ZAMORA

At a time when demand for food is expected to shoot up as population grows and productivity in food production faces increasing challenges, agribusiness ventures are seen as future growth areas that need a push.

In a country endowed with 17,460 kilometers of coastline, aquaculture may be fertile ground for businesses both big and small.

Still, be it marine-based or land-based, farm activities present opportunities for both producers and buyers.

Joseph Martin H. Borromeo, president of the Philippine Association of Fish Producers Inc. (Pafpi), thinks domestic players need to work on the consolidation of a fragmented industry, which he said faces a “huge potential” as a driver of economic growth.

Borromeo said the aquaculture sub-sector was primed to be the biggest source of food fish as output from wild capture fishing has reached a plateau.

“Asia including the Philippines is driving and will continue to drive growth in fish production as supplies lag behind demand,” Borromeo said.

Even then, he said the Philippines had dropped a notch to 11th worldwide in terms of fish production, with Myanmar dislodging the country from 10th place.

In comparison, neighboring Vietnam racks up 3.08 million tons or 4.6 percent of the total to rank third globally.

“The Philippines continues to have a very, very big opportunity in aquaculture but our resources, while we are much endowed, are underutilized,” Borromeo explained.

According to Pafpi, the value of total fisheries production was pegged at P238 billion or $5.8 billion in 2015, with over half of that coming from aquaculture instead of capture or wild fishing.

The industry also said that from 2000 to 2014, total fishery production grew by 3.8 percent yearly while aquaculture grew by 5.7 percent yearly.

Among farmed fisheries products, the major ones are seaweeds, bangus, tilapia and shrimps.

However, just as in the rest of Asia for the most part, aquaculture in the Philippines is mainly a game where the players are small-scale that operate disparately.

“We need for such numerous players to consolidate and go for centrally managed operations,” Borromeo said. “There lies the opportunity even for big businesses, because this is where they can help effectively. We need to help mainstream smallholders into the value chain and not keep them within the farm gate.”

Back on land, Jollibee Food Corp. relies on a partnership program with growers of high-value crops to maintain a reliable mix of suppliers—big-volume suppliers as well as smaller producers—for its various brands.

Through Jollibee Group Foundation (JGF), JFC intends to increase the volume of such crops that it is directly buying from farmers cooperatives by 25 percent this year, partly due to the success of its farmer entrepreneurship program (FEP).

JGF executive director Gisela Tiongson said the group wanted to source a total of 1,000 tons of commodities directly from the farmers, increasing from 800 tons in 2016.

“We want to expand the number of our direct suppliers to 15 groups this year and to 20 groups by 2018,” Tiongson said.

She said produce bought directly from farmers account for 20 percent to 30 percent of the Jollibee group’s annual supply needs.

Tiongson said group brands that use such supplies include the flagship Jollibee fast-food chain, Chowking, Mang Inasal and Greenwich.

To improve the logistics and supply delivery under the farm entrepreneurship program, Tiongson said JFC had launched a commissary in Cebu City where farmers can deliver their products directly to Jollibee.

She said the group wanted to set up additional supply centers to serve regions in Luzon, including Calabarzon.

Buying produce directly from farmers is getting a stronger push as the Department of Agriculture has called on big business groups to do so, to help farmers get more income by bypassing middlemen.