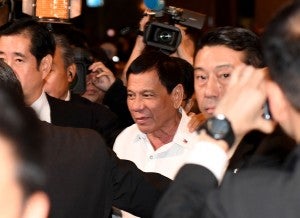 That was how businessman Manuel V. Pangilinan described a three-hour dinner with President Duterte and other tycoons at Malacañang Palace Tuesday night.

The event was organised by Joey Concepcion, presidential consultant for entrepreneurship, and Pampanga Rep. Gloria Macapagal-Arroyo,  former President and now deputy speaker at the House of Representatives.

Pangilinan, who heads some of the country’s biggest companies such as PLDT Inc., Metro Pacific Investments Corp. and Philex Mining Corp., said the dinner event was the first of its kind given his experiences with the last “five or six presidents.”

“I think it’s good to have a dialogue with the President,” Pangilinan told reporters Wednesday. “He expressed what’s on his mind, and the business groups conveyed to the President their commitment, particularly in the poorest areas of the country.

He said there were talks on potential investments in Mindanao.

“Each business group proffered ideas, suggestions, commitments to the President as to what each of us can do,” he added.

“There was a lot of discussion on the Sulu area, and certain areas in Mindanao where the private sector could help,” Pangilinan said.

He said his group offered to invest in hospitals, telecoms, housing and “possibly” a coconut mill in Sulu province.  SFM