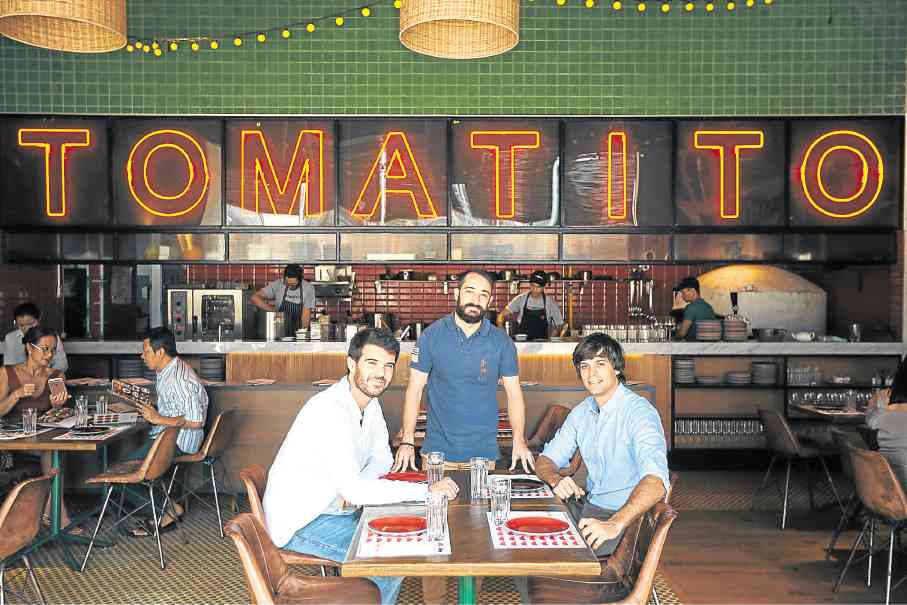 From a winery to a cocktail bar to a couple of restaurants to a churreria and, soon, a food court outlet.

In a nutshell, that is the gastronomic journey of 31-year-old Spanish guys Uri Singla, Sergi Rostoll and Dani Aliaga, who, over a decade ago, decided to try their luck in the Philippines’ dining industry. It was a gamble that, obviously, paid off as the three college buddies now run a number of restaurants under the company La Lola Group: Las Flores and Tomatito in Bonifacio Global City, Rambla in Rockwell, churreria chain La Lola, and Rico Rico Paelleria, which is opening this month at the food court of SM Aura.

Their first venture, however, when they arrived in the country in 2003, was Barcino, a wine and tapas bar which now has six branches in Metro Manila—and has become a favorite haunt among wine lovers. It seemed only natural, given that Rostoll and Aliaga, who studied tourism and hotel management in university, chose to focus their thesis on the Philippines’ industry.

“Uri was the strange one—he was studying Chemical Engineering,” says Aliaga. “But he was the first among the three of us who got into [food and beverage]. He was already an on-call [worker] for different five-star hotels and restaurants when [Sergi and I] started becoming on-calls.”

What they found out, Aliaga says, is that Filipinos love three alcoholic drinks: Gin, beer and brandy.

“That was the top three, but the consumption of wine was growing. When we realized that, we thought, ‘Hey, why don’t we bring in nice, low-priced wines?’ Because here, wine is something only those who are ‘up there’ drink, while in Spain, it’s our water,” Aliaga says. “Wine doesn’t have to be expensive to be good. So that was our edge in Barcino—good, affordable wines.”

After opening a small space in Julia Vargas, the three friends were able to grow Barcino and bring it to other areas in Metro Manila before finally deciding to sell their shares four and a half years ago.

“By that time, I think people were ready for something different,” says Aliaga on why they moved on from Barcino to Las Flores, a cocktail and tapas bar. “There were not so many places where you could go to get a nice drink. When we opened, we knew we were a bit pricey, but we knew that the quantity of alcohol in that cocktail was legit.”

Singla, Rostoll and Aliaga were on a roll. A year after Las Flores was born in BGC, Rambla opened in Rockwell. “It’s more Catalan, or more Barcelona in style in terms of food,” Aliaga says.

Then came another adventure for the three, a year and a half later: La Lola Churreria. The business partners were pleasantly surprised to be offered a space also in Rockwell for such concept, which has always been included on their list of many restaurant ideas. It is also the group’s first venture into franchising. 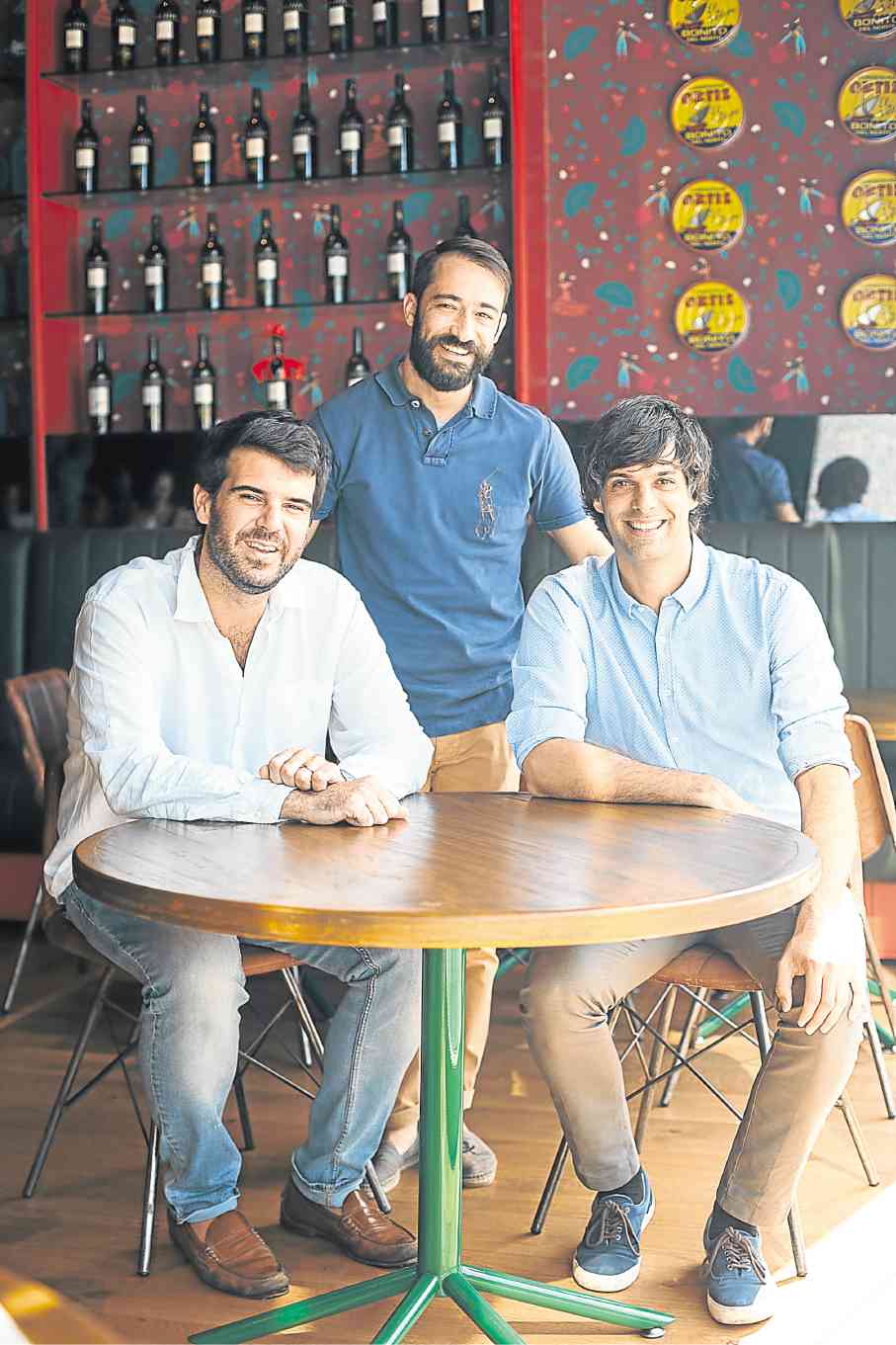 Singla, Rostoll and Aliaga are on a roll.

“[When we first opened it], Uri was making coffee, I was at the cashier, and our executive chef back then was the one at the fryer. We had to wing it the best way possible, because we didn’t know how the acceptance would be,” adds Aliaga. “You had other companies offering churros, but we always felt there was another angle to it. You don’t need to sit down and be in a proper restaurant. For us, it was about bringing churros to all layers of society, and bringing this characteristic snack from Spain to every single type of person.”

Judging by the recent opening of La Lola’s 20th store in SM Dasmariñas, the churreria seems to be a welcome addition to the local dining scene. The group plans to expand the brand farther down south to Cebu and Davao, says Singla.

And they’re not stopping with just that. Just recently, La Lola Group opened another Spanish restaurant in BGC: Tomatito. It’s a concept established in partnership with chef Willy Trullas Moreno of El Willy Fun F&B Group, who put up the same restaurant originally in Shanghai.

Also in the pipeline is Rico Rico Paelleria, which opens this month in SM Aura’s fourth-floor food court. With this concept, Aliaga says they hope, as with La Lola, to tap a wider market, especially since food court concepts in malls have started to become more “modernized.”

Such is the strength of the three men behind La Lola Group: Their keen sense of what the latest trends are in the food business, and how to go about building new concepts.

“As people are evolving, we are also adjusting and adapting. I think we adapted very well to the evolution. That has been something very nice to experience as a foreigner, because we get to see how the Philippines grows, how people get to travel more,” says Aliaga. “There was a point when people would come to the restaurants and talk to us about certain wineries or certain regions in Spain, and we were, like, you know more than [we do]. I think that’s beautiful, to see people gaining more knowledge and demanding [more].”

It seems, after almost 15 years of serving us their food, the trio has also evolved to become Pinoys at heart. Rostoll is married to a Filipina and the couple is expecting their first baby.

“We are part of the [Filipino] people; we want to cater to [them],” says Aliaga. “Everything we have, we owe it to the Filipino people and the Philippines.”