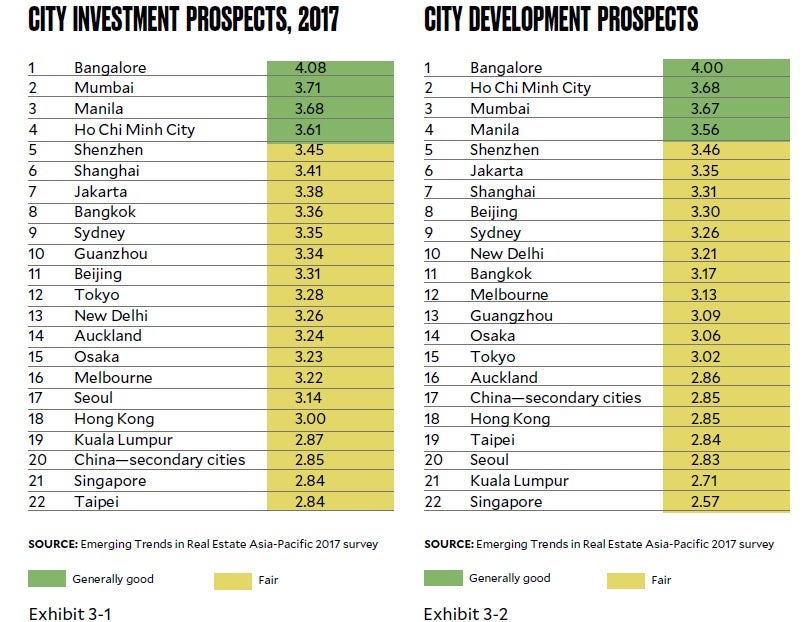 Metro Manila is among Asia-Pacific’s most attractive urban hubs for developers and yield-seeking real estate investors this 2017, especially in the office and shopping mall space, based on the latest research on emerging trends in real estate commissioned by Urban Land Institute (ULI) and global advisory firm PwC.

On city investment prospects, Metro Manila ranked third next to Bangalore and Mumbai among 22 cities surveyed in the region.  Together with Ho Chi Minh, these four are the only cities with scores deemed “generally good” while the rest received “fair” ratings.

“Compared to previous years, top rankings have been taken over by emerging market cities,” said Ken Rhee, ULI’s chief representative to China who presented the latest research in a briefing Thursday night.

This year’s investment prospects showed a strong shift away from last year’s favorites—which were dominated by Japan and Australia—in favor of emerging markets like India, Vietnam and the Philippines.  Singapore has likewise seen a sharp decline in appeal, now ranking close to the bottom at 21st from 11th a year ago and after grabbing the top slot in 2011 and 2012. The results also showed a change in strategy from “flight to safety” to “quest for yield.”

From 2007 to 2012, Metro Manila was a bottom-dweller on the ULI-PwC annual list, ranking between 18 to 20 in terms of investment prospects.  In 2013, it improved its ranking to 12th place, rising to fourth place in 2014 and staying at 8th place in the last two years.

“The Philippines has attracted positive comment for the last several editions of this report, with a vibrant economy led by a booming BPO (business process outsourcing) and strong remittances from overseas workers,” the research said.

“Today, the fundamentals appear as strong as ever.  Demand is resilient, with many buildings pre-committed before completion. Vacancies remain low and office capital values and rents continue to show good growth.  Meanwhile, the logistics, traditionally a laggard in the Philippines, is also seeing accelerating demand based on increasing consumer sales.”

In terms of property types, Metro Manila topped the office and shopping mall categories, with 85.7 percent and 66.7 percent respectively, recommending a “buy” on these assets.  The capital region also ranked highly in hotels, where 71.4 percent of respondents recommended a “buy.”

In industrial/distribution property, majority of respondents (57.1 percent) recommended a “buy.”

But the research noted some risks on the horizon for the Philippines, due to global economic woes particularly in  the Middle East possibly gnawing on overseas remittances.