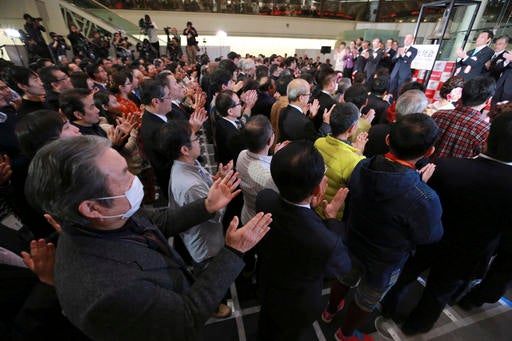 Staff of the Tokyo Stock Exchange and guests make a ceremonial hand-clapping during a ceremony marking the start of this year’s trading in Tokyo Wednesday, Jan. 4, 2017. AP

TOKYO — Global shares rose Wednesday as gains in the U.S. and Asian markets carried over into European trading. The Tokyo benchmark jumped in the opening day for 2017, helped by a weak yen.

JAPAN MANUFACTURING: Investors were encouraged by Wednesday’s release of the Nikkei Japan Manufacturing PMI, a survey of purchasing managers. The reading of 52.4 for December was its highest in a year. The figure is based on a scale of 0 to 100, where 50 marks the cutoff between contraction and expansion. Manufacturers cited rising orders from the U.S., China and Europe as one factor behind the improvement.

THE QUOTE: “Strong sentiment at the start of the year coupled with volatility could be what 2017 has in store for the markets,” said Jingyi Pan, a market strategist at IG in Singapore.